‘Be Better’: Celebrating the Life of Summer Hammond ’17

“For Summer, I ask you, as we celebrate her tonight, that we try to emulate her joyfulness and positivity as she would have wanted,” Anoush Arakelian ’14 told a packed Rollins Chapel yesterday as the Dartmouth community gathered to remember the life of Summer Hammond ’17. 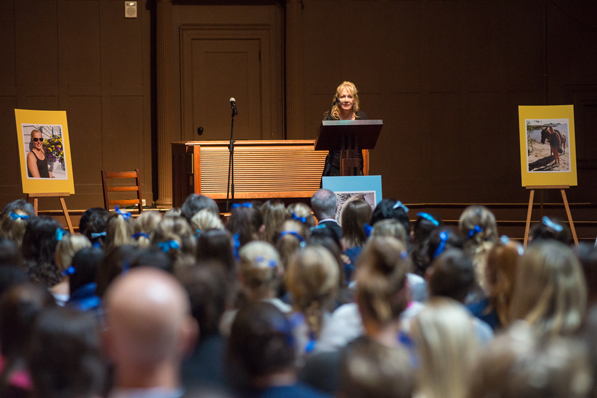 At a celebration of the life of Summer Hammond ’17, her mother, Sharon Hammond, thanked the Dartmouth community on her daughter’s behalf. (Photo by Eli Burakian ’00 )

And indeed, throughout the hour-long celebration there was laughter as well as visible grief as roommates, teammates, sorority sisters, staff, and classmates told stories about their friend, who died of cancer on July 20. Organized by Tanya Budler ’15, Jennifer Cunningham ’17, and Aliyah Gallup ’17, the memorial also featured a moving performance by Ben Colello ’18 and Lloyd May ’18 of “Let Her Go,” by English singer-songwriter Passenger.

As for how the mourners should understand Hammond’s death, President Phil Hanlon ’77 said, “I wish I possessed the wisdom to tell you precisely what it is we should learn from the loss of one so young and precious, so full of life and sunlight.”

Instead he urged the assembled to look to “the lessons we learn from Summer’s life—from the way she lived her brief beautiful life.”

Hammond came to Dartmouth from Centennial, Colo. Though originally diagnosed on her 16th birthday with a cancer that reemerged during her first year at Dartmouth and again when she was a sophomore, she threw herself into her Dartmouth experience with a zest for life and a caring for others that many in the chapel expressed a wish to emulate.

At Dartmouth she played on the women’s club soccer team, was a dedicated member of Kappa Kappa Gamma, participated in a language study abroad (LSA) program in Argentina, and instilled in her friends an enthusiasm for country music and line dancing. A lover of animals, she had hoped to become a veterinarian, taking challenging biology courses even at a late stage of her illness. Several observed that she would never miss a class if she could help it.

She was committed to raising money and awareness for cancer research, including the American Cancer Society’s Relay for Life—for which she was among the top 25 fundraisers this past spring—and the annual Prouty fundraiser for Dartmouth-Hitchcock’s Norris Cotton Cancer Center. Just days before her death, she and Budler completed nine holes of golf for the Prouty.

“It’s OK to feel sad. It’s OK to feel happy. And it is OK to miss Summer,” said Gallup, who met Hammond on their first-year trip and shared a room with her in Topliff Hall last year. She described her bond with Hammond, speaking about her friend in the present tense. “There’s just something about her that makes you feel so special while being with her. You can feel that she really truly cares about you all the time.”

Budler said she was sure Hammond would be laughing to see “all of Kappa wearing blue bows and blue sweaters right now. She’s really happy about that.”

She called Hammond a “role model,” noting how rare it is to discover a mentor in someone younger than oneself. “She was the biggest role model and mentor to all of the upperclassmen, and you can see that today because there are so many alumni who are back to celebrate her memory,” she said.

“I really hold onto two words that she has always said to herself and to everyone around us: ‘Be better’ ”—a better friend, a better student, a better person.

Cunningham, who lived on the same floor as Hammond as a first-year student, echoed Budler’s theme as she read from Maya Angelou’s poem “When Great Trees Fall,” which ends with the lines, “We can be. Be and be/better. For they existed.”

Hailey Carter ’17 and Rachel McKee ’17, representing Kappa, also invoked Hammond’s selflessness and positivity—and recalled how she had joined in a sorority flag football tournament despite a recent blood transfusion that left her physically fragile.

“And yes, she intercepted the ball three different times and was our star player,” they said.

Amanda Flugstad-Clarke ’15 spoke on behalf of the women’s club soccer team, saying that “if there is one person in the entire universe who can inspire me to step this far out of my comfort zone without even being here, it would be Summer.”

Flugstad-Clarke described how teammates would take turns driving Hammond to Dartmouth-Hitchcock Medical Center for chemotherapy treatments. After one such treatment, her driver assumed she would want to go back to her room to recuperate. “Summer was shocked at the idea—they were already 40 minutes late for practice!”

Anne Bracken, director of clinical medical services at Dick’s House, the College health service, and an assistant professor of medicine at the Geisel School of Medicine said, “At Dartmouth we are fond of saying, ‘What would Summer do?’ ”

With Larissa Hopkins, assistant dean of undergraduate students, Bracken ran through a list of Hammond’s experiences at Dartmouth—from rescuing a classmate on horseback during her Argentinian LSA to sneaking out of the ICU to attend Kappa’s spring formal—demonstrating the answer to that question. After a cancer relapse diagnosed after her first-year trip, Hammond would tell her parents to go home. “She has to start classes, try out for club soccer, and, oh, by the way, have a very serious surgical procedure—and it’s really no big deal, Mom and Dad, so see you later.”

Bracken said it was Hammond’s parents who “freed her to stay at Dartmouth and be all that she wanted to be to the very last second of her way-too-short but phenomenal journey through this life.”

“She would want to thank each and every one of you for how you influenced her life and allowed her to live joyously. She would then at this point remind us, borrowing from that very famous phrase, there’s no crying in the celebrations of life—especially when there will be a country band and line dancing.”

The service was indeed followed by dancing. A reception in Collis Common Ground featured New Hampshire-based country band The Shana Stack Band as well as a slideshow remembrance of Hammond. Participants had an opportunity to write cards with their own memories.

And they were encouraged to pick up teal bracelets inscribed with the words, “Forever Positive—Summer’s Way.” Budler said the bracelets hearkened back to those created in memory of Blaine Steinberg ’15, who died suddenly in 2014.

Summer didn’t know Blaine, Budler said, but was so inspired by the story of her legacy that she wore a green ‘Live Like Blaine’ bracelet as a reminder of what she strived to do in the world.

“It is our turn to live on Summer’s legacy in the same way,” Budler said. “There’s always going to be that hole, but there’s always her huge spirit and positivity to fill it up.”