The team from MSNBC’s Morning Joe is returning to Dartmouth on Oct. 22 to tape a segment with John Kasich, the Ohio governor and Republican presidential candidate. 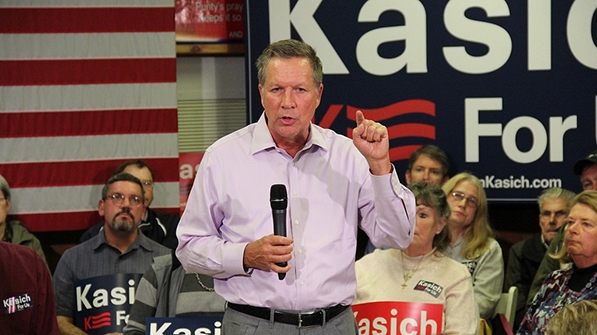 Republican candidate for president John Kasich speaks at a forum in Littleton, N.H. (Photo from John Kasich for America)

Kasich, who has made dozens of campaign stops across New Hampshire in recent weeks, will be interviewed by hosts Joe Scarborough and Mika Brzezinski for the cable news program beginning at 2:30 p.m. on Thursday at Collis Common Ground. Seating is limited and will be given on a first come, first served basis.

The candidate will follow the interview with a question and answer session for voters from the Dartmouth community and the Upper Valley.

Hanover and the College have for decades been campaign stops for presidential candidates of both parties as they make their way through the first-in-the-nation primary state.

This is the second time this year that Morning Joe has brought MSNBC’s flagship weekday morning news program to Dartmouth. On May 1, Scarborough and Brzezinski broadcast live from the Tuck School of Business. The show featured interviews with Dartmouth President Phil Hanlon ’77 and Matthew Slaughter, the incoming dean of the Tuck School of Business and the Signal Companies Professor of Management. This week’s event is sponsored by the Nelson A. Rockefeller Center for Public Policy.

Kasich’s campaign stops in New Hampshire have often focused on the economy and the federal budget. Last week in Nashua he outlined his economic plan, saying he would balance the federal budget in eight years, and pointing to his fiscal discipline as governor of Ohio. The campaign said during the Dartmouth visit, Kasich will talk about the national economy, and he looks forward to responding to questions from voters.