If Hanover seems more surreal than usual next week, it’s because the international conference “Dalí, Lorca, and Buñuel in America,” which runs from Oct. 15–17, will be in town. 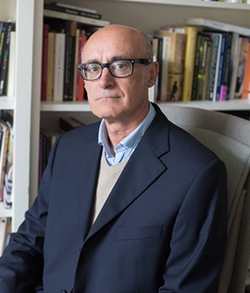 The conference, organized by Dartmouth Professor of Spanish José del Pino, will bring more than a dozen scholars from around the world to Dartmouth to explore how painter Salvador Dalí, writer Federico García Lorca, and filmmaker Luis Buñuel were influenced by visits to the United States in the early part of the 20th century.

All events are open to the public, and students are encouraged to attend. “One of my goals when I organize conferences is to get students involved as much as possible,” del Pino says.

Del Pino has built the conference into the syllabus of the undergraduate course he is teaching this term, “Spanish 40: Dalí, Lorca, and Buñuel: The Secrets of Spanish Surrealism”—and students from the class will be reading poetry with conference participants at the close the conference on Saturday.

Department of Spanish and Portuguese

Department of Film and Media Studies

And del Pino collaborated with the Digital Arts, Leadership, and Innovation (DALI) Lab, a research and development lab in the Department of Computer Science. (“It seemed obvious to go to them because of the name,” he says.)

When the Spanish artists came to America in the 1920s and ’30s, “New York was replacing Paris as the art capital of the world, and they wanted to experience that,” del Pino says. “But in general terms, they had some difficulties understanding U.S. culture. They were very connected to the old European tradition. They were educated in a different way, and not all of them knew how to appreciate this new form of democracy, of populism, popular culture.”

While Dalí became enamored of what he found in America—forming connections with Walt Disney and Harpo Marx, and landing on the cover of Time magazine—and leveraged the experience into international stardom, Buñuel had limited success in the United States; his career took off later, in Mexico and France. And Lorca, whose Poet in New York was only published after his death at the hands of right-wing nationalists during the Spanish Civil War, was “profoundly alienated by the mass culture phenomenon and the economic crisis” that he experienced in New York in 1929 and 1930, del Pino says.

Events begin at 5 p.m. Thursday, Oct. 15, in the Hood Museum of Art Auditorium, when Antonio Monegal, professor of literary theory and comparative literature at the Universitat Pompeu Fabra-Barcelona delivers the Dr. Allen W. Root Contemporary Art Distinguished Lecture, “Travelling between the Avant-Garde and Mass Culture: The American Journeys of Dalí, Lorca and Buñuel.”

“He’s an engaging and very knowledgeable speaker,” says del Pino of Monegal, who has written extensively on the Spanish surrealists and curated several exhibitions of their work. “He did his PhD at Harvard with renowned comparatist Claudio Guillén—the son of Jorge Guillén, who was a Spanish poet of the same group as Lorca. I thought it would be good to have someone with a large vision on the period, the big picture.”

The conference includes a screening of the classic Buñuel films (created in collaboration with Dalí) Un Chien Andalou and L’Age d’Or—“two films that provoked a big scandal” when they were first screened, del Pino says. They will be shown at 7 p.m. Friday, Oct. 16, in the Hood Auditorium.

“The films are still quite subversive as they present violence, including sexual violence, without any judgment, because violence and sexual impulses are primal instincts,” del Pino says. “One of the goals of the surrealists was to transgress and subvert the morals of the hegemonic classes. There’s also a lot of influence of Freud and psychoanalysis—they want to endow artistic form with irrationality, lack of logic, and to the most basic instincts, those of violence and sexuality.”

Associate Professor of Film and Media Studies Paul Young will discuss the films’ significance in the transition from silent movies to sound. Also featured at the screening will be two short films completed posthumously: Destino, an animation based on drawings by Dalí and released in 2003 by Walt Disney Company; and Viaje a la Luna, based on a screenplay by Lorca.

In conjunction with the conference, an exhibition on surrealism, “Prepare Your Skeleton for the Air: Surrealism and the Spanish Avant-Garde,” curated by Jill Baron, librarian for Romance languages and literatures and Latin American Studies, will be on view in Baker-Berry Library.

“Rauner has a fantastic collection of surrealist materials, but what I was surprised to discover was that even in the Baker stacks, we have first editions of important surrealist texts from the 1920s and 1930s, some of which illustrate Dalí’s involvement with the Parisian avant-garde,” Baron says. “I was also delighted to find original exhibit catalogs of Dalí in Sherman Library’s special collections.”

She adds, “The experience proved to me, not only as a librarian, but also as a researcher, the vital importance of sustaining a high-caliber research library at Dartmouth.”

Lori Loeb, co-founder and executive director of DALI Lab, says that the artist Dalí indeed inspired the lab’s name. “I had visited Dalí’s home in Cadaqués, Spain, and was really moved and reminded about why I got into this work,” she says. When del Pino contacted her about the conference, “it seemed like a perfect match.”

DALI students produced a video montage of the artists’ work that will be shown with the exhibition in Baker-Berry Library. (The team also worked on an interactive project using Microsoft Kinect technology that scans viewers and shows ants crawling on their hands—an homage to the famous scene in Un Chien Andalou—although Loeb says that piece may not be complete in time for the conference).

For several of the DALI students, the project was the first encounter with the surrealist movement. May Nguyen ’18, a double major in economics and cognitive science from Ho Chi Minh City, Vietnam, says, “The most interesting part of working on this project is learning more about the surrealism movement in the movie Un Chien Andalou. The movie perplexes me, but I was definitely motivated to do some research on my own on this topic.”

“We had qualms about looping through the video Un Chien Andalou on the first floor of Baker-Berry, because people uninformed of the surrealist movement would be quick to write it off as ‘weird’ or ‘inappropriate,’ ” Nguyen says, “but I hope our project could motivate people to find out more and understand more deeply this artistic movement.”

“Dalí, Lorca, and Buñuel in America” is sponsored by the Hood Museum of Art, the Department of Spanish and Portuguese, Friends of Dartmouth College Library, the Leslie Center for the Humanities, and the Office of the Dean of Arts and Humanities. 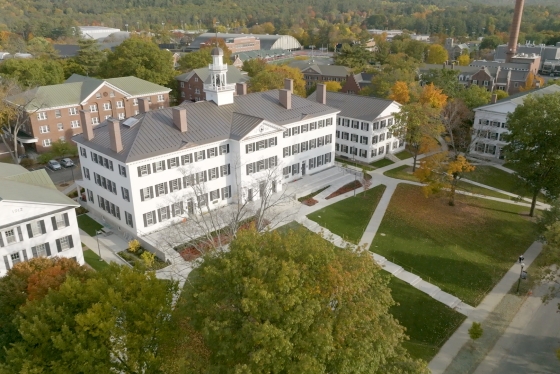 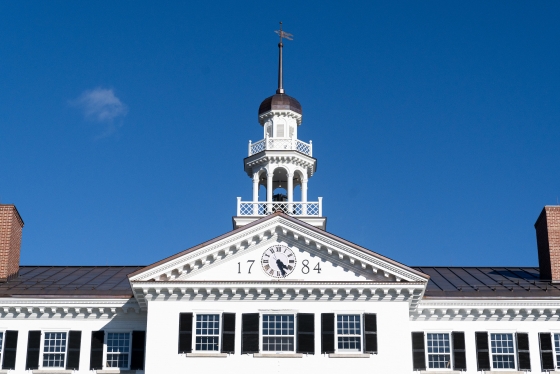