This year refugees and migrants are streaming into Europe in greater numbers than at any time since the end of World War II—more than half a million of them after dangerous Mediterranean Sea crossings. The widespread suffering of those fleeing their native countries has been portrayed throughout the global media, and the European Union has been riven by disagreements over how to absorb just 160,000 of the refugees. 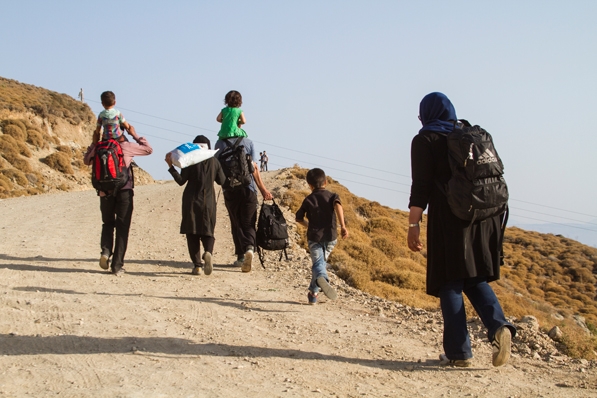 More than 500,000 refugees and migrants have arrived in Europe so far this year, most of them taking their chances aboard unseaworthy boats on the Mediterranean Sea. The United Nations estimates that more than 3,000 people have died on the journey. (Photo courtesy of Tyler Jump/International Rescue Committee)

The humanitarian and political crisis created by this desperate flood of men, women, and children into Europe is the focus of a panel discussion—“Humanity Uprooted: The Brutal Causes and Devastating Consequences of Europe’s Refugee Crisis,” that will be held at 4:30 p.m. on Monday, Oct. 12, in Cook Auditorium.

The panel will include Bob Kitchen of the International Rescue Committee, who established the NGO’s relief operations in Greece, the primary European entry point for the flood of refugees; Sir Michael Leigh, a former top European Union official who dealt with the EU’s relationships between member states and neighboring countries; and Graziella Parati, the Paganucci Professor of Italian Literature and Language and director of the College’s Leslie Center for the Humanities, an expert on migration issues. It will be moderated by Daniel Benjamin, the Norman E. McCulloch Jr. Director of the John Sloan Dickey Center  Center for International Understanding.

“The refugee crisis in Europe—with its record-breaking number of migrants—has caught international attention like few other stories this year,” says Benjamin.

“On the one hand, we see the extraordinary human suffering and the international community’s shortcomings in helping them and in addressing the root conflicts,” he says. “On the other hand, we see European institutions being pulled apart by disagreements over how to handle the crisis. With this event, we’re trying to get at both aspects of the crisis.”

Benjamin says the panelists provide an outstanding opportunity for the Dartmouth community to hear from experts who have a firsthand understanding of the unfolding crisis.

“Bob Kitchen has been on the ground, doing the work of providing food and shelter for the refugees for one of the world’s foremost humanitarian organizations. Professor Graziella Parati has studied the migrant experience in depth, so she adds a vital dimension to our understanding,” Benjamin says. “Finally, Michael Leigh knows both the politics within the EU and the relationships between the EU, its member states, and neighboring countries as well as anyone out there.”

The program is sponsored by the Office of the Provost, the Dean of the College, the Leslie Center for the Humanities, and the John Sloan Dickey Center for International Understanding at Dartmouth.