Neutrinos are elusive, shape-shifting subatomic particles—probably  the smallest particles in the universe. They are quintessentially Star Trek and also the stuff of real science. They even won a Nobel Prize for two physicists this year. 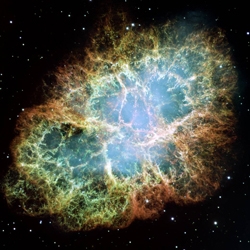 A supernova explosion resulted in the formation of the crab nebula. Almost all of the energy released in the explosion was in the form of neutrinos, elementary particles that help reveal some of the secrets of the universe. (Photo courtesy of NASA, ESA, J. Hester, A. Loll (ASU))

In awarding the Nobel on Oct. 6, the Royal Swedish Academy of Sciences says the discovery that neutrinos have mass “has changed our understanding of the innermost workings of matter and can prove crucial to our view of the universe.”

Takaaki Kajita in Japan and Arthur B. McDonald in Canada shared the prize for demonstrating that neutrinos change identities, often referred to as “flavors.” In order to do so, they must have mass. Here’s what Dartmouth’s physicists say about the neutrino findings.

“I think the only doubt anyone has is not whether neutrinos have mass, but ‘how’ they get their mass. The thing is, neutrinos may not be involved in the same mechanism for mass—the Higgs boson mechanism—as electrons and other particles. The precise value of the mass of neutrinos is still an open question. There are three types of neutrinos, as far as we know, and physicists have measured the difference in mass between two pairs of neutrinos. But like a triangle, you need three sides not just two, and there remains missing one crucial piece of information. Cosmologists staring at the sky hope that they can get to the answer before the particle physics experimentalists working underground. My research on dark energy is affected by the existence of neutrino mass, too.”

Sylvester James Gates, Jr., Dartmouth’s Roth Distinguished Scholar for 2015-2016 and the John S. Toll Professor of Physics at the University of Maryland:

“I most heartily concur with Bob’s [Caldwell] comments about where the ‘real action’ is on the topic of neutrino masses. The question of whether neutrinos have mass is debated in the particle physics community about as much as whether anthropogenic activity drives climate change is debated in that community. The vast majority of experts agree the answer is ‘yes.’ ”

“I can concur with the two other flavors. I must add though that the discovery and the prize was for the flavor oscillation. The simplest/Occam’s thing to do is give them mass which is likely the case once we understand more about the completion of the Standard Model or it’s super symmetric cousins (interestingly some super symmetric theories naturally encode neutrino oscillations). There have been some intriguing albeit speculative ideas of connecting neutrino oscillations to dark energy. But there are some contentions. Fun to put it out there anyways.”

“The first experimental hint of the three neutrino flavors came from the work of Ray Davis who studied the solar neutrinos and also got the Nobel Prize. He only got one-third of what solar models predict. However, the Kajita and McDonald groups built devices that can detect all three flavors. Neutrinos are considered one of the major constituents of the universe. Although hard to detect, they have been observed in astronomical sources, supernova 1987A, the Sun, the IceCube [South Pole particle detector] experiments, etc.

“They are theoretically important in processes such as supernovae, the early universe, etc. The origin of mass, related to the Higgs field is still being debated and neutrinos can play a part in this as well as dark matter, although they are not currently thought to be the source of dark matter. Note that the DUNE experiment being constructed at Fermilab with an international collaboration costing billions of dollars will study a high intensity neutrino beam running 800 miles from Batavia, Ill. to Sandford, S.D.”

Marcelo Gleiser, the Appleton Professor of Natural Philosophy and professor of physics and astronomy:

“I don’t think you can have neutrinos morphing into one another out of their three types (think a flying light flashing green, red, and blue) unless they have mass, even if a very small one. The Nobel Prize was very well deserved, as the discovery opens the door to new kinds of questions related to what lies beyond our current knowledge of high-energy physics. Neutrinos are very weird particles. Proposed by Wolfgang Pauli in 1930, they are known as ‘ghost particles’ for their uncanny ability to fly through matter practically as if it didn’t exist. In fact, right now, some hundreds of billions of neutrinos per second are going through your body.

“This year’s prize celebrates, once again, the neutrino mystery. The fact that neutrinos can morph into one another implies that they have a small mass. This is very big news, since the Standard Model of particle physics—that combines all our current knowledge of the fundamental particles of matter and their interactions—considers the neutrinos to be massless. The fact that they have a mass implies that our current picture of the subatomic world is incomplete.”

Our existential problems right now are rooted in the very real climate crisis, which we must address immediately. 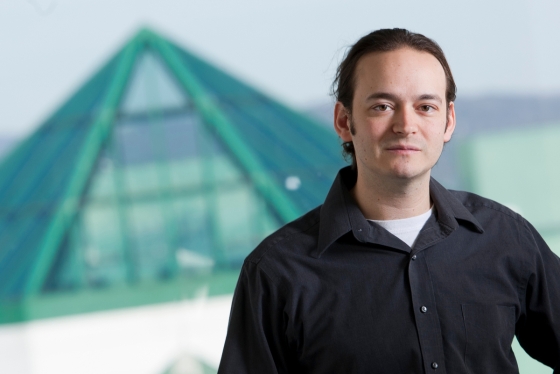