The Dartmouth United Way campaign kicked off this week with a goal of raising $295,000 in two months.

“We hope that the Dec. 15 closing date for the campaign will create a sense of urgency for our donors and make for an active and energetic campaign,” United Way Co-Chair Gail Gentes told coordinators and volunteers gathered at the launch breakfast in the president’s house.

United Way coordinators in the College’s divisions and departments are the key to the campaign’s success, say Gentes and campaign Co-Chair Rick Mills. This year’s fundraising target, a $12,000 increase over last year, was set after reviewing targets estimated in each division, said Gentes.

“This will give our coordinators a specific goal for their people, and we hope it will generate a sense of excitement,” says Gentes. 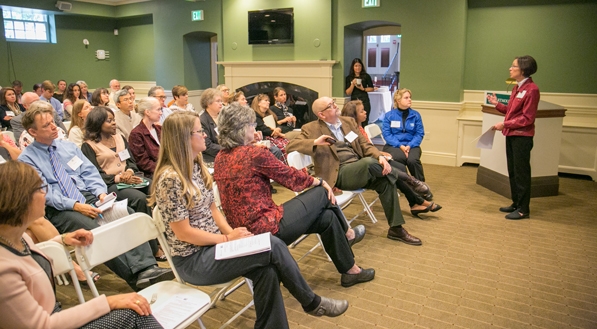 Prudence Pease, coordinator for Granite United Way’s new Working Bridges program, spoke at the kickoff breakfast. The program is a partnership with six major Upper Valley employers to help low- to moderate-wage workers find resources to solve problems that may impair workplace productivity, including housing issues, finances, mental health crises, and transportation difficulties. The goal of the services is to retain employees and enhance workplace productivity.

Pease spoke about a single mother who asked for help, saying she needed to run away. The woman, a recently naturalized citizen, was receiving calls from a credit card collection agency telling her that if she did not pay off her debt, she would be jailed and her daughter put up for adoption. Working Bridges and the woman’s employer offered her access to a lower-interest short-term loan fund, which helped her solve her debt problem.

“We’re stopping crises before they escalate and result in unemployment,” Pease says.

Karen Mongeon, a Dartmouth United Way coordinator who works in the general counsel’s office, says she is inspired by the broad scope and reach of the United Way in the Upper Valley.

“I’ve seen the campaign develop and today it has a lot more behind it—more tools. But it has always been a great cause and I’ve always had a passion for it,” says Mongeon, a Dartmouth United Way volunteer for 30 years.

All Dartmouth employees received a United Way pledge packet in the last week. Donations can be made in a number of ways, including by going to the Dartmouth United Way website and clicking the “Donate Now” button.