The popular TV host will discuss football-related concussions and the MVP’s potential to reduce injuries on the practice field. Colbert, whose Colbert Report persona boasted of a (fictional) Dartmouth degree, will don a Dartmouth helmet to take on the MVP. The Late Show’s new host will also interview Teevens, a leading advocate for eliminating player-on-player tackling in practice, and Elliot Kastner ’13, Thayer ’14, who designed the MVP along with Quinn Connell ’13, Thayer ’14, and Thayer Research Engineer John Currier ’79, Thayer ’81.

The MVP has put Dartmouth in the limelight as the No. 2 ranked team in the Ivy League preseason poll heads into a Homecoming game against Yale with a 3-0 record and high hopes for ending a nearly 20-year drought in pursuit of the Ivy League crown.

Since its debut last month on the Dartmouth practice field, the MVP has attracted national media attention and interest from the NFL and other teams. The MVP is the first powered device that simulates a real football player in size, weight, agility, and speed by replicating an in-game experience. 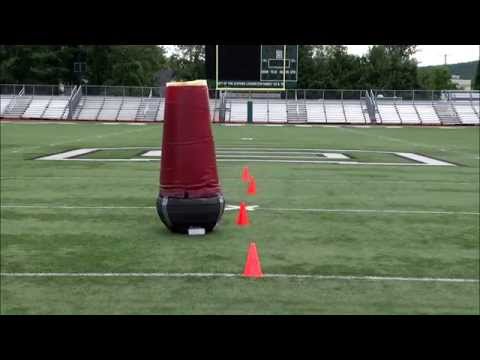 The motorized prototype looks like an ordinary tackling dummy but is wheeled, self-righting, and remotely controlled. Future models will more closely resemble an actual player and have pre-programmed routes and drills. The MVP can be used in a variety of drills, from tackling and blocking to running and passing, allowing players to make full contact while minimizing head, neck, and other injuries.

The project, which illustrates President Phil Hanlon’s emphasis on innovation, experiential learning, entrepreneurism, and engineering, started two years ago when Teevens asked Thayer to create a safer, more effective means for players to train for contact. Since then, Kastner, Quinn, and Currier have been testing various models in preparation for marketing the MVP next spring to pro, college, high school, and youth teams.