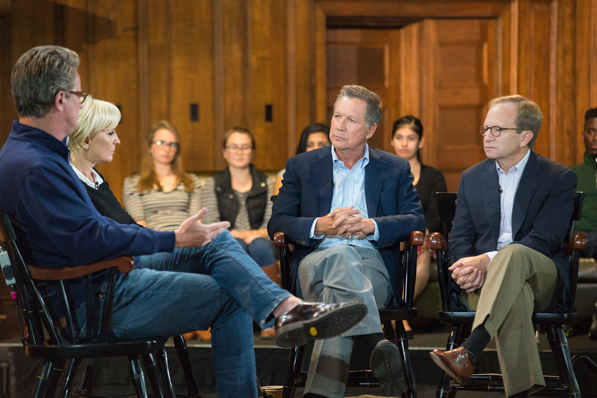 In the first of an anticipated series of Morning Joe candidate conversations to be held at the College, Kasich, a Republican, stressed his role balancing the federal budget as a U.S. congressman, his work as governor of Ohio to improve the economy while shoring up social programs, and his willingness to reach across the aisle to get things done.

Morning Joe co-host Joe Scarborough greeted the crowd from the stage of the remote studio set up in the wood-paneled Collis Common Ground. Every seat was filled, including a bank of chairs set up behind the stage so that the College audience would be visible in every shot.

Scarborough said the show plans to come to Hanover several time as part of a series of long-form interviews with presidential candidates leading up to the New Hampshire primary.

“We love being here in Hanover, New Hampshire, and we do want to come back, so we hope Joe behaves,” Brzezinski said.

Hanover and the College have for decades been campaign stops for presidential candidates of both parties as they make their way through the first-in-the-nation primary state.

Scarborough told the crowd that it was Kasich’s political mission to balance the federal budget that inspired his own run for Congress in 1994. Scarborough served as a Republican representative from Florida during Kasich’s term as chairman of the House Budget Committee. “So if you hate me, you can blame John Kasich.” 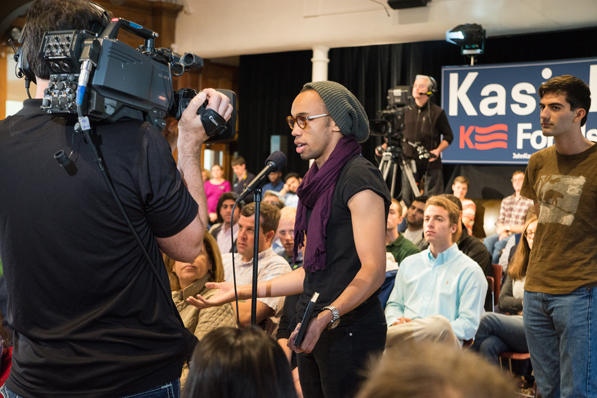 Dartmouth students were active participants throughout the program, asking questions and interacting with Kasich, Scarborough, and Brzezinski. Several students asked Kasich how he would deal with the polarized partisan politics of Washington.

Kasich noted that he has never believed in attacking the opposition. “You have to keep at it. Sometimes you can’t agree, but then you come back on another issue.”

“Look, my father would never have believed I would be where I am. It’s true, if you change one life, you change the world. Don’t give up hope,” Kasich said to applause.

Bantering with the crowd, Scarborough called out Bernie Sanders supporter Elijah Moreno ’15, who is graduating after the fall term.

“Hey—Bernie shirt in the back—a shout out!” he said with a big laugh as Moreno smiled and nodded.

Speaking in the hall outside the event, Moreno said, “Obviously I have my own preferences, but I want to hear what Kasich has to say.”

Moreno said going to school in New Hampshire gives Dartmouth students a great opportunity to be politically involved. “I don’t think there are many undergraduate schools where you get to see so many presidential candidates.”

He plans to take any opportunity to see for himself what the candidates are all about. “Any candidates who are going to be on campus, I’m definitely going to make my way to see them,” Moreno said.

Other presidential candidates who have visited Dartmouth this year include former Maryland governor and Democratic candidate Martin O’Malley, who has made two campaign stops on campus, most recently on Oct. 16. Democratic candidate Hillary Clinton held a campaign event at the Bema, Dartmouth’s natural amphitheater, over July Fourth weekend. And former New York Gov. George Pataki, a Republican presidential hopeful, spoke on “America’s Economic Future” at the Tuck School of Business on Oct. 5.

This is the second time this year that Morning Joe has brought MSNBC’s flagship weekday morning news program to Dartmouth. On May 1, Scarborough and Brzezinski broadcast live from the Tuck School of Business. The show featured interviews with Dartmouth President Phil Hanlon ’77 and Matthew Slaughter, dean of the Tuck School of Business and the Signal Companies Professor of Management. This week’s event is sponsored by the Nelson A. Rockefeller Center for Public Policy and the Social Sciences