Lawrence is the Parents Distinguished Research Professor in the Humanities. 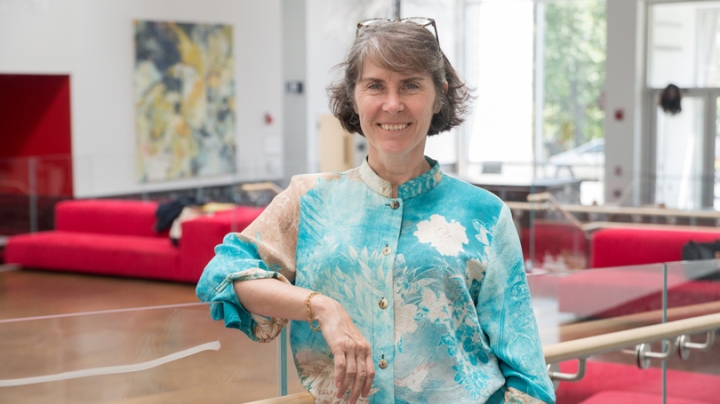 “For the past couple of years I’ve had the students work on paranormal television—and that’s evolved into the research project that I’m working on,” says Amy Lawrence, the Parents Distinguished Research Professor in the Humanities. (Photo by Eli Burakian ’00)
10/05/2015
Body

This is the sixth in a series of profiles of the 10 new endowed professors in the arts and sciences.

A professor of film and media studies and comparative literature, Amy Lawrence came to Dartmouth in 1988. She is the author, most recently, of The Passion of Montgomery Clift, as well as a book on the films of director Peter Greenaway and of Echo and Narcissus: Women’s Voices in Classical Hollywood Cinema, as well as numerous scholarly articles and book chapters. Among her interests: the phenomenon of Hollywood stardom, feminist issues in film, the use of sound in cinema, and reality television. She also makes animated films.

I was very surprised—but it’s an honor. This allows me time and funds for research. It’s just a huge vote of confidence.

I’m in the middle of a project on the representation of the paranormal in reality television shows. It’s a genre that’s treated with contempt, and yet it’s extremely popular—there are more than 30 shows currently, usually in the outer reaches of cable, and I was fascinated with why they’re popular, how they reflect on contemporary society in ways that aren’t being addressed by other kinds of programming, and also how they reflect changes in television itself.

The students here are really good, and I have always enjoyed being able to teach pretty much what I want to teach. I like teaching first-year seminars, actually, because the first-year students are so enthusiastic. And teaching has influenced my scholarship. We have a course on theory and methodology that all the film and media studies majors take. For the past couple of years I’ve had the students work on paranormal television—and that’s evolved into the research project that I’m working on.

How the film and media department has evolved:

When I originally came to Dartmouth, there wasn’t a film department or even a major in film, just a few courses offered in the then-drama department. So my career here has paralleled the development of the department at Dartmouth, and of the entire field. It’s always been a matter of envisioning and then realizing what we could do that other colleges don’t do. A lot of colleges teach either production or critical studies, but from the very beginning we envisioned a unified program where students would take both history and theory as well as learning various kinds of production. We expanded from a film studies department to film and television, and then with the addition of digital arts we became film and media studies. And now we’ve been able to expand from documentary and narrative filmmaking to teaching game, animation, and television production—as well as widely expanding our offerings in critical studies. The new Black Family Visual Arts Center is fabulous—I’m just crazy about it. It’s been gratifying to see the department get better and better.

Dartmouth is just a lovely place. The College is very supportive of our department and our individual scholarship. I’m always interested in what my colleagues are doing. It’s a very rewarding place to be.