Daniel Kotlowitz is the Leon E. Williams Professor of Theater. 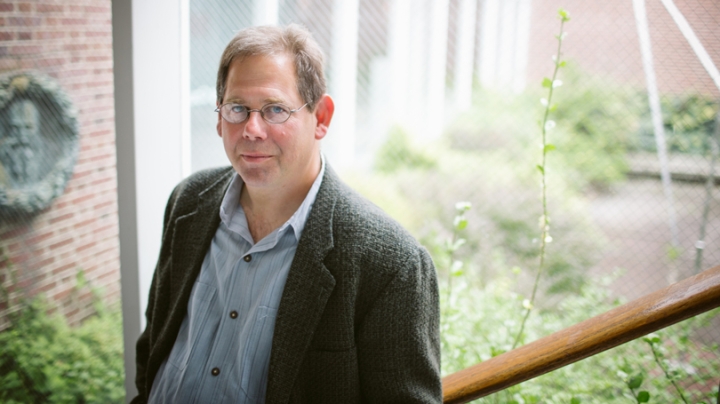 “I’m very interested in using motion capture with dance and theater. I’d like to explore the possibilities of light responding to a performer’s movement—setting the parameters of that response for each movement,” says Daniel Kotlowitz, the Leon E. Williams Professor of Theater. (Photo by Robert Gill)
10/02/2015
Body

This is the fifth in a series of profiles of the 10 new endowed professors in the arts and sciences.

Daniel Kotlowitz is a lighting and projection designer and professor of theater who has taught at Dartmouth for 20 years, and is currently chair of the theater department. His designs for more than 200 professional productions have been seen in theaters throughout New York City and around the country, as well as in nearly a dozen European countries, from Paris and London to Lithuania, Norway, and Greece. At Dartmouth he has been a Melville Straus Fellow and a Petit Family Fellow, and in 2008 he was awarded the John M. Manley Huntington Memorial Award for outstanding teaching and research.

I’m an artist-teacher more than a scholar, so it’s nice to have Dartmouth acknowledge the importance of that.

I’m very interested in using motion capture with dance and theater. I’d like to explore the possibilities of light responding to a performer’s movement—setting the parameters of that response for each movement. And I’m starting to lay the groundwork for a project about a boy who was in a coma for 10 years, knowing what was going on around him, but totally locked in. For me the interest is in creating the two realities—what this boy is feeling and experiencing, and then the reality around him that is totally ignorant of what is going on inside. It’s the alienation of it, being trapped, and that thing under the surface that we all have. Nobody really knows what we’re all thinking all the time. I want to use digital projection as my main tool—projecting on the body. I’m not interested in white-screen projections, but surfaces that have some shape and form.

Lighting is an obscure field, so most of the students in my class don’t have any experience with it. One thing that I’ve been learning is the kind of gentleness that’s needed in the criticism I give students. It’s hard to know what is a purely aesthetic critique and what is a true critique of something simply not being done right. Part of that is in trying to find the student’s voice in the work. I get very critical in the classroom, but generally students understand that I’m talking about their craft, so they don’t feel like I’m trying to twist their words as much as the way that they’re saying it.

What keeps me here is my colleagues in the theater department and friends across Dartmouth. The constant level of intellectual stimulation is important. And I guess that’s ultimately what keeps me here—the community of Dartmouth, and the students. I also love the area; it’s just so beautiful here.