Former Maryland Gov. Martin O’Malley plans a presidential campaign stop at Dartmouth on Friday, part of a sweep through New Hampshire fresh from the first Democratic debate this week. 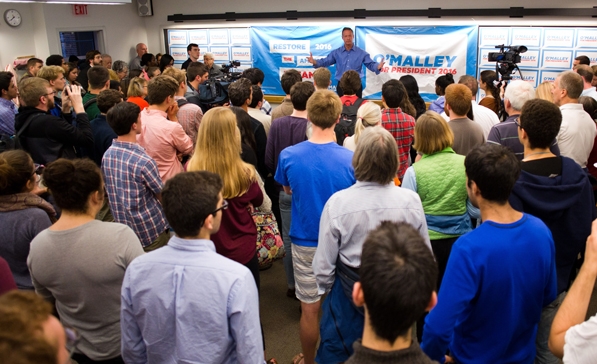 Former Maryland Gov. Martin O’Malley speaks to students, faculty, and other community members during his visit to campus May 31. (Photo by Rob Strong ’04)

“Gov. O’Malley will highlight his 15-year progressive record of getting things done while mayor of Baltimore and governor of Maryland, and he is looking forward to taking questions from Dartmouth students and faculty,” says Matt Sheaff, O’Malley’s New Hampshire campaign spokesman.

The College Democrats will welcome O’Malley at the start of the town hall, which was arranged by the O’Malley campaign, not the College. The student group has issued invitations to all the Democratic hopefuls, but will not endorse any candidate.

O’Malley has spent more time in New Hampshire than any other candidate, says Sheaff, and the governor sees the state’s primary as integral to his race for the Democratic nomination. O’Malley was also one of the earliest candidates to campaign in New Hampshire, making Dartmouth one of his first stops a day after declaring his entry into the race in May.

O’Malley’s organization also has strong Dartmouth connections. His deputy campaign manager is Lis Smith ’05, who led the College Democrats at Dartmouth and went on to major roles in a number of political campaigns including as spokeswoman for Bill de Blasio’s 2013 campaign for mayor of New York City. She was also director of rapid response on Obama’s re-election campaign.

O’Malley’s press secretary is Haley Morris ’08, a former staff writer for The Dartmouth who went on to work as Midwest regional press secretary for the Democratic Congressional Campaign Committee in the 2012 cycle, and as communications director on U.S. Rep. Gary Peters’ 2014 campaign for U.S. Senate in Michigan.