Salman Rushdie Calls for a Return to Magic in Fiction

To a full house in Spaulding Auditorium on Monday, author Salman Rushdie, in his first visit to Dartmouth, made an impassioned call for the fantastical in fiction.

In his first-ever visit to Dartmouth, Salman Rushdie speaks before a packed house Oct. 20 in Spaulding Auditorium. (Photo by Robert Gill)

“I’m trying to make a case for something out of fashion. We live in an age of nonfiction,” he said.

While “serious fiction has turned to realism, away from magic,” he believes that myths, legends, fables, and fairy stories—what he calls “wonder tales”—can offer deeper truths about human nature than narratives that limit themselves to the possible.

His talk ranged from a bloody analysis of the body count in One Thousand and One Nights to the ways in which animal fables change according to the country of their telling. “As a migrant myself, I’ve always been fascinated by the migration of stories,” he said.

“After Joseph Anton I felt well and truly done with nonfiction,” he said, referring to his 2012 memoir, which describes his years in hiding from extremists homicidally enraged by his satiric representation of Islam in his novel The Satanic Verses.

For his latest work, the novel Two Years Eight Months and Twenty Eight Nights (which adds up to one thousand and one nights), he sought the other extreme—“tales full of beautiful impossibility, the stories that were untrue but told the truth by being untrue.”

The new book is a wholehearted return to genies, fairy worlds, curses, and theological disputes between medieval philosophers fought from beyond the grave. 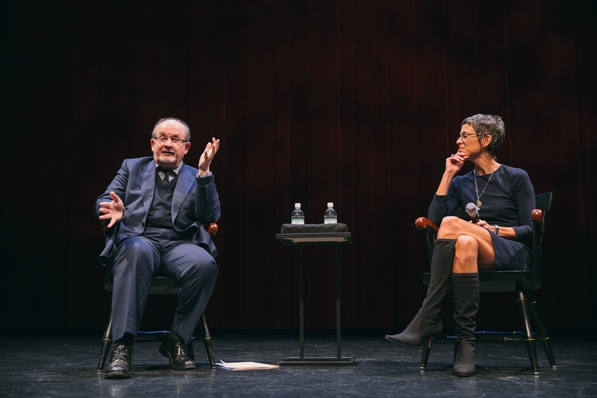 During a question-and-answer period after the lecture, Associate Dean of the Arts and Humanities Barbara Will, the A. and R. Newbury Professor of English, joined Rushdie on stage and served as moderator. (Photo by Robert Gill)

Following Rushdie’s lecture, the author was joined on the stage by Associate Dean of the Arts and Humanities Barbara Will, the A. and R. Newbury Professor of English, who moderated a lively question-and-answer session with the audience.

Attendees asked Rushdie about the challenges facing writers today, how he evaluates his own writing, whether characters from his novels continue to live in his mind once the book is published, and what moving to the United States has meant for his work.

In answer to the latter, he said, “I describe myself as a writer of the big city” more than of a particular nation, noting that his novels have been set in Bombay (now Mumbai), London, and Manhattan. “In a big city your story is surrounded, assailed, assaulted by all kinds of other narratives”—a sense of crowdedness that he tries to capture in his books.

“The main story has to push its way through the crowd,” he said.

One questioner asked if writing a memoir had changed his sense of his memories. “Memoir is a way of using up the past,” he said. “Now I’m obliged to be fictitious.”

Asked about censorship, Rushdie put equal blame on authoritarian power, including that of extremist religions, and on the fashion of political correctness.

“Hearing people say what you don’t want to hear is one of the great joys of living in an open society,” he said, to applause.

Earlier in the day, the author spent more than an hour meeting with undergraduates in Sanborn Library.

“It was fantastic,” said Peter Skow ’18 of getting to meet with Rushdie in Sanborn. Skow is taking a course on the Arabian Nights taught by Hussein Kadhim, an associate professor of Asian and Middle Eastern languages and literatures.

“I got to ask him about this idea of oral storytelling—how it plays into his works and into fiction as a whole,” Skow said. “He talked about oral storytellers in southern India and the ways that they keep an audience interested in a story, which are totally different from what you’d expect in modern Western literature. It’s this idea of many stories going on at once, and everything ties into something else, which is fascinating to me.”

“I’m intrigued with how much he knows beforehand when he’s starting out with a book, versus how much he lets the characters take him,” she says. “He said that we need to know how our character speaks before we can put them on a page.”

MacMillan says that getting to meet established authors “demystifies the work that we read—we see who creates it, and can imagine ourselves as creators.”

Instead of giving the creative writing students the familiar advice to “write what you know,” Rushdie encouraged students to write what they don’t know.

“Remember that fiction is fictional—try to make things up,” he said.

Rushdie’s visit was sponsored by the Office of the President and Dartmouth’s Kenneth and Harle Montgomery Endowment.