A new LiveSafe security app tailored specifically for Dartmouth students, faculty, and staff is now available as a free download for smartphones, says Harry Kinne, director of Safety and Security. 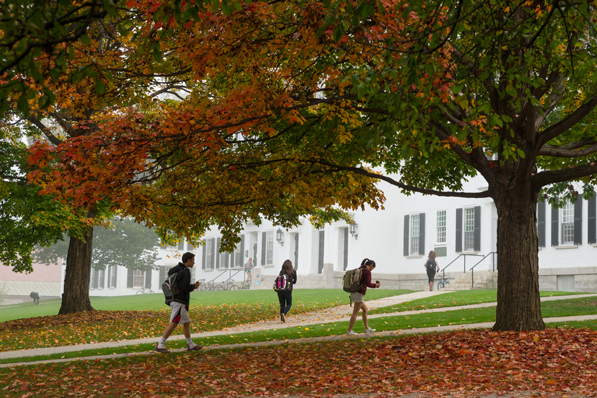 Any member of the Dartmouth community can download the LiveSafe app from Google Play or iTunes. (Photo by Eli Burakian ’00)

The goal is for any member of the Dartmouth community to easily share information with friends and safety officials about sexual assault, mental health issues, violence, or any other safety concerns, thereby preventing incidents before they occur, says Kinne, who led the Moving Dartmouth Forward committee that reviewed applications in use at other colleges and universities.

“This Dartmouth-specific safety smartphone app allows members of the Dartmouth community to easily and immediately seek assistance if they ever feel threatened,” Kinne says. “We presented the new app to first-year students and undergraduate advisers during orientation, and have already seen a great response.”

Any member of the Dartmouth community can download the LiveSafe app from Google Play or iTunes. The site will ask for the name of college the user is looking for, and the Dartmouth-specific application is free to download. About 300 people have already downloaded the LifeSafe app, Kinne says, and Safety and Security has already seen it at work, including in a recent “Good Sam” call. The Good Samaritan Policy allows students to call Safety and Security to report an intoxicated student without fear of facing sanctions for violations of the College alcohol policy.

“We see it as part of our Bystander Initiative because it allows for anonymous reporting and will be very accessible to students in particular, who are very used to texting as a way of communication,” he says. “It offers another way for people to intervene.”

In addition, users can send photos or videos to Safety and Security or call 911 directly with the touch of a button. The app can also be GPS enabled.

“We would not be able to see people at all times, nor would we want to, but during an emergency, or if someone were going for a run alone, for example, they could activate the GPS. It would only be transmitted if they hit that emergency button and we would be able to pinpoint their location,” Kinne says.

Safety and Security will continue to promote the new app. “Our ultimate goal is to get as many people as possible to use it,” Kinne says.

Kinne called the LiveSafe technology “another tool in the Moving Dartmouth Forward effort to support a safe and healthy environment for work and study.”

The new app supplements an array of safety measures and programs already in place, including the DartAlert emergency notification system, which works on all phones; the Alertus system, which allows security pop-up alerts on desktop computers; the network of more than 100 Blue Light emergency phones around campus that provide a direct line to Safety and Security; and efforts like the Dartmouth Bystander Initiative and a range of training and education programs developed through the Title IX and Clery Act compliance office.

“Our research of the app at other colleges and universities shows that students are more willing to just send a text message, or send some information,” says Kinne. “It doesn’t have to be a crime per se. It could be something like a big hole in the ground or any unsafe condition. They can actually take a picture and send it to Safety and Security, anonymously if they want.”

The application also includes Dartmouth-specific information on sexual assault prevention, resources for victims, Title IX protections, and a range of other data that can be accessed directly on users’ phones.