Wendy Sherman, the lead U.S. negotiator in the landmark nuclear agreement with Iran, will speak about the complex political work involving both Iran and the U.S. Congress that went into getting the deal done. Her talk is set for Oct. 27. 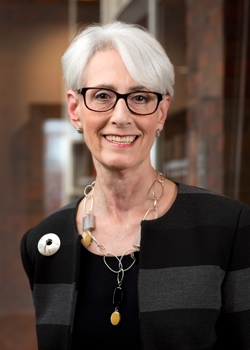 The former under secretary of state for political affairs, Sherman will talk with Daniel Benjamin, the Norman E. McCulloch Jr. Director of the John Sloan Dickey Center for International Understanding, at the event, which begins at 4:30 p.m. in Filene Auditorium in Moore Hall.

Secretary of State John Kerry, speaking on the occasion of Sherman’s retirement from government service earlier this month, noted that in four years as under secretary, she traveled to more than 50 countries on America’s behalf playing a major role in diplomatic challenges, including the Ukraine crisis, the Syrian civil war, the confrontation with ISIS, and the elections in Sri Lanka.

“Whatever the issue, Wendy could be counted on for advice and diplomacy that was smart, realistic, and sure to advance America’s interests and values,” Kerry said.

“It’s a real coup that Wendy Sherman can join us at Dartmouth just a few weeks after her retirement from the State Department,” says Daniel Benjamin. “As someone who worked closely with Wendy during the first Obama term and has known her for many years, I consider her to be one of the sharpest, most insightful thinkers in the policy world today.”

Benjamin, who served at the State Department from 2009 through the end of 2012, added, “Given the incredibly acrimonious debate over the Iran deal—and given her role in making the deal—Wendy Sherman is the ideal person to make the case for this landmark diplomatic achievement.”

Kerry also highlighted Sherman’s major role in negotiating the nuclear pact with Iran, which went into effect earlier this week.

“Among the many issues on which Wendy and I worked side by side were the multilateral talks aimed at ensuring the peaceful nature of Iran’s nuclear program,” Kerry said.

“Through meeting after meeting, month after month, with characteristic savvy and tenacity Wendy kept the talks on track, overcoming setbacks, reinforcing morale, steadily working through the issues, and narrowing the differences so that—with a final push—an historic agreement could be reached,” Kerry said.

Sherman’s appearance at Dartmouth, sponsored by the Dickey Center, is free and open to all.