Dartmouth has received gifts totaling $20 million to establish two interdisciplinary faculty groups, called academic clusters, to help elevate the institution as a global leader in the fields of neuroscience and digital humanities and to attract exceptional scholars whose work will benefit individuals and societies around the world. 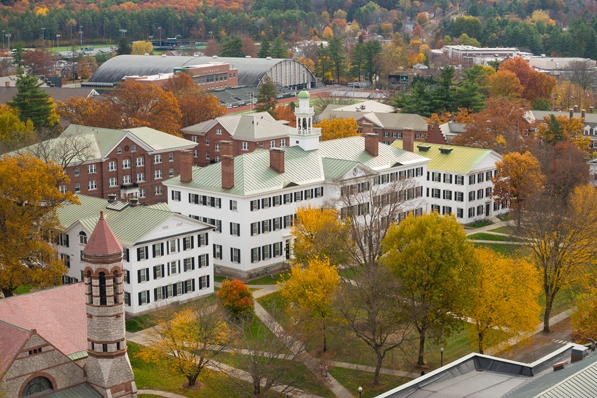 The two new clusters will be named Breaking the Neural Code and Understanding What It Means to Be Human in the Digital Age. (Photo by Eli Burakian ’00)

The first new academic cluster is in neuroscience and will focus on understanding how the contents of the mind—which define the characteristics of each person—are encoded in patterns of activity among the billions of cells in the human brain. The lead professorship in this cluster will be named in honor of Diana L. Taylor ’77. Gifts from Gregg L. Engles ’79 and Anne and Mark C. Hansen ’78 will support two other professorships.

The second new cluster—in digital humanities and social engagement—will examine the intersection of digital technology and human creativity and knowledge, ultimately exploring what it means to be human in the digital age. This cluster is supported by a single anonymous gift.

Each cluster will permanently endow three professorships and provide additional resources for research, scholarship, and co-curricular activities. Both will build on existing strengths—as Dartmouth already possesses extensive expertise in neuroscience and digital humanities—and foster increased opportunities for interdisciplinary collaboration. The resulting research and scholarship will potentially have global benefits and provide unique opportunities for undergraduates and graduate students to participate in cutting-edge research.

Health Care, Globalization Each Get a $10 Million Gift

“I am delighted and incredibly proud that we will be able to launch these two academic teams,” says President Phil Hanlon ’77. “We know we’re living in a time when advances in technologies are reshaping societies and even redefining ourselves in ways we do not fully understand, and solving the mind-brain puzzle may well be the neurological equivalent of decoding the human genome—a tremendous achievement that once was considered impossible. Dartmouth faculty can be world leaders in these two great challenges of our time.”

Understanding the link between the mind and the brain—breaking the neural code—will unleash unprecedented amounts of new knowledge and empower dramatic scientific advances. Research in this field could lead to advances in treatment of diseases such as Alzheimer’s, and to the development of devices such as a prosthetic speech synthesizer that would enable people with amyotrophic lateral sclerosis, also known as Lou Gehrig’s disease, to communicate by decoding their thoughts. Breaking the neural code could result in breakthroughs in the social sciences, such as decoding brain activity while individuals make economic decisions.

“One can only speculate about the full range of potential applications of neural decoding,” says Professor James Haxby, director of Dartmouth’s Center for Cognitive Neuroscience and Brain Imaging Center. “What is certain, however, is that understanding the language of the human brain will spark a revolution with profound effects on the academy, the economy, and society.”

Diana Taylor is a Dartmouth trustee and vice chair of Solera. She previously served as a managing director at Wolfensohn Fund Management LP and as New York State superintendent of banks. Gregg Engles, also a trustee, is chairman and chief executive officer of WhiteWave Foods Company. The Hansens are members of the Dartmouth President’s Leadership Council and the parents of a Dartmouth student. Mark Hansen is a partner with the law firm Kellogg, Huber, Hansen, Todd, Evans & Figel in Washington, D.C.

Understanding What It Means to Be Human in the Digital Age

The academic cluster in digital humanities and social engagement will create a comprehensive mission in digital research at the College. It will delve into complex issues of the social and ethical dimensions of digital technologies, including how to address the digital divide between those with and those without Internet access and the definition of “human” in an age of implantable and wearable computer devices that record every biological function. The cluster will also work to develop digital tools that incorporate the humanities to foster civic engagement.

“Many digital humanities projects at Dartmouth have included research that connects emerging technologies to significant social issues in our times, with vast implications well beyond academia,” says Michelle Warren, a professor of comparative literature and the project lead for the digital humanities and social engagement cluster. “With this cluster, Dartmouth will gain further prominence by focusing the creativity of a collaborative research team on some of the most complex questions in the humanities today.”

Academic clusters are a central element in President Hanlon’s institution-wide strategy to build on several of Dartmouth’s areas of distinction by recruiting top scholars who will teach and conduct research as part of interdisciplinary groups whose teaching and scholarship will address major global challenges. Collaborating with peers across campus, these faculty will create new knowledge, enrich the learning experience of students, and make Dartmouth a magnet for top faculty and students.

In 2014, Dartmouth received a $100 million gift, half of which is being used as a match toward the creation of academic clusters. Through the end of this calendar year, each $10 million received to establish an academic cluster will trigger a $5 million match. The gifts announced today fund the fifth and sixth clusters of a possible 10 that will receive this match.