During a Hanover campaign stop arranged by Dartmouth student supporters, New Jersey Gov. Chris Christie vowed to make an impression despite being bumped from the top tier of Tuesday’s GOP presidential debate. 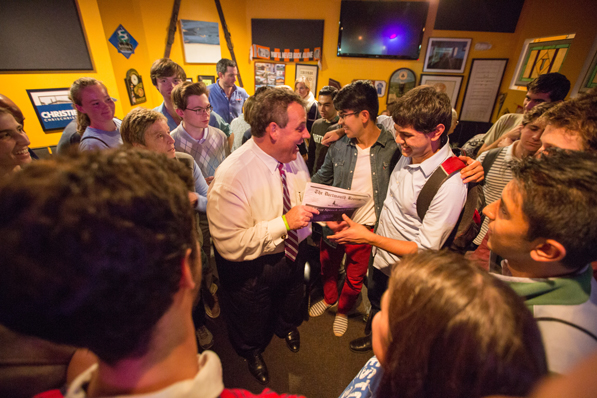 “They’ll be talking about us on Wednesday morning—you can take that to the bank,” he said to cheers in a packed Salt hill Pub in Hanover on Friday afternoon.

On Thursday, the Fox Business Network had announced that national poll numbers for Christie and former Arkansas Gov. Mike Huckabee fell below the 2.5 percent cutoff to qualify for the main debate stage. Christie’s Hanover stop drew a large media contingent reporting on the candidate’s reaction to the news.

Christie said he needed to clear the air before launching into his stump speech and taking questions. He wanted to let the media know, he said, that he has no intention of bemoaning his place in the second-tier debate. On another subject, he told the crowd, “I have to start off with an honest admission to the students here at Dartmouth—I have a son who is a Princeton Tiger.”

To mock boos, Christie said, “See, I wanted to get it out of the way up front.”

The rest of Christie’s remarks centered on his 20-year affiliation with an adolescent drug rehabilitation center in New Jersey called Daytop Village. He spoke about meeting Father Joe Hennen, a Catholic priest and co-founder of the center who impressed on him the idea that substance abuse is a disease, not a moral failing.

The problem of substance abuse has become a major presidential campaign issue in recent months, particularly in New Hampshire, where Gov. Maggie Hassan has called a special session of the legislature to address the state’s growing drug problem.

A video of Christie’s stump speech at a town hall meeting in Belmont, N.H., and shared by the Huffington Post on Oct. 30 has been viewed more than 7 million times.

“We have all made bad choices. Why are we penalizing people for making bad choices? We have to embrace them. We have to say there but for the grace of God go I,” he said.

Ryan Maquire ’16, who heads the Dartmouth Students for Christie organization, said, “Going to Dartmouth provides a unique opportunity to really get involved in the political process, particularly through the primary period. It’s really exciting to have the candidate actually come to the campus to talk with us.”

Over the decades, Dartmouth has been a destination for presidential primary hopefuls. The College has hosted Republican and Democratic debates in past cycles, and this year brings a parade of candidates.

Former Maryland governor and Democratic candidate Martin O’Malley has made two campaign stops on campus, most recently on Oct. 16. Republican John Kasich, governor of Ohio, appeared at a campus taping of the cable news show Morning Joe on Oct. 22. Democratic candidate Hillary Clinton held a campaign event at the Bema, Dartmouth’s natural amphitheater, over the July Fourth weekend and returns Nov. 10 to take part in a forum sponsored by Tuck’s Center for Global Business and Government. Past Tuck events have featured Republican hopefuls George Pataki, the former New York governor, on Oct. 6, and South Carolina Sen. Lindsey Graham, on Nov. 4.