Supporters and opponents of fracking have been debating over the degree to which fracking is benefiting the economy versus affecting the health and environment of our communities. In a new National Bureau of Economic Research study, Dartmouth professors focus on the income and employment consequences of fracking. They find that over a third of fracking revenue stays within the regional economy.

For the study, researchers analyzed data from oil and natural gas production from 2005 to 2012 and found that within 100 miles of new production, $1 million of extracted oil and gas generates $243,000 in wages, $117,000 in royalties and 2.49 jobs— an economic impact three times larger than within the county of a fracking site.

The impact on jobs and income at the state level was approximately five times larger than the county impact.

Unlike other studies to date, which may rely solely on a county-based analysis, the study examines the impact of fracking within 100 miles of new drilling sites, which takes into account workers who commute to a site, and other spillover economic activity experienced by neighboring counties.

Three types of income associated with fracking were analyzed: the wages of workers, who were directly involved in the extraction process through the resource extraction and transportation industries; the landowners who received royalties on the value of production affecting their land; and the impact on wages and employment in other industries not directly related to oil and gas production. 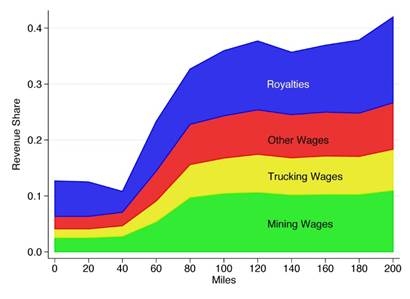 The study was based on data from income and employment from the Bureau of Labor Statistics, income data from the Internal Revenue Service, and data on oil and natural gas production from Drillinginfo.com.

With the creation of 725,000 jobs associated with the new oil and gas extraction between 2005 and 2012, the study findings indicate that U.S. unemployment was lowered by 0.5 percent during the Great Recession; however, it is likely that fracking had a much larger impact on the economy given that the study only focuses on new extraction.

As the pros and cons of fracking will continue to be a topic of debate among our communities, analyzing how income shocks hit the local and regional economies within a 100-mile radius and beyond can be useful for discussion, especially for regions where fracking bans are in place, as in the case of New York State.

###
---
Note to reporters: A pdf of the study and hi-res images are available upon request.
Broadcast studios: Dartmouth has TV and radio studios available for interviews. For more information, visit: http://communications.dartmouth.edu/media/broadcast-studios
Share this
FacebookTwitterEmail
Articles