An Eye on Microgravity

Though the vision change astronauts experience is not a major problem, it can be permanent.

Read the full story by Susan Green, published by the Geisel School of Medicine.

As fun as weightlessness may appear to be, microgravity poses health challenges for astronauts. Eyes are among the organs affected, and some astronauts on long-duration missions are returning to Earth with permanent changes in their vision. 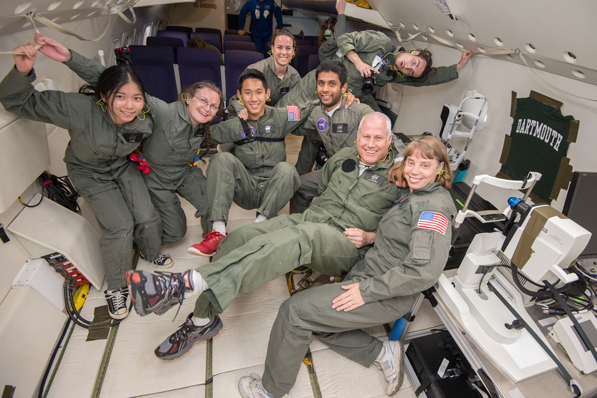 “It’s not just vision that’s altered. The structure of the eye changes,” says Jay Buckey, a professor of medicine and head of the Space Medicine Innovations Lab at the Geisel School of Medicine. “The eye’s a bit shorter and looks as though it’s been pushed from the back. This is something usually seen in people who have elevated pressure in the fluids surrounding the brain—a condition called ‘idiopathic intercranial hypertension.’ ”

Astronauts, however, do not show any of the other signs of elevated pressure in the head, and the reason for the flattening of the eyeball is mysterious. Though the vision change is not a major problem—it results in farsightedness and can be corrected with glasses—it can be permanent. What concerns Buckey is that it’s happening at all, and he’s driven to understand why. A former astronaut, Buckey flew in 1998 as a payload specialist aboard the Space Shuttle Columbia’s Neurolab Mission, and has written a textbook on space physiology and the adaptation to microgravity.

Buckey’s interdisciplinary “Space Eyes” team has been investigating the detrimental effect of microgravity on eyes for the past three years. In his lab at Geisel, they study the effect of changes in the direction of gravity on the eye by taking measurements from individuals in different body postures.