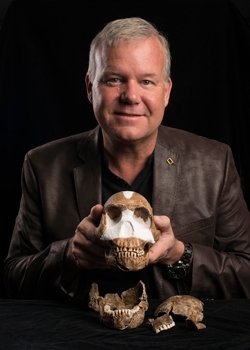 Lee Berger, an American paleoanthropologist whose team recently discovered the remains of a new species of human ancestor in a cave in South Africa, will discuss the fossil find during talks Nov. 16 and 17 at Dartmouth, Hanover High School, and the Montshire Museum of Science in Norwich, Vt.

Berger, a research professor at the University of the Witwatersrand in Johannesburg and a National Geographic explorer-in-residence, is visiting campus at the invitation of Dartmouth’s Jeremy DeSilva, an associate professor of anthropology who co-led the analysis of the creature’s feet.

Berger’s lecture is titled ”Almost Human—the Discovery of Homo naledi.” The fossils of H. naledi—more than 1,600 of them—are the single largest fossil hominin discovery ever made.

“Such a rich trove of fossil specimens is unparalleled,” says DeSilva, a paleoanthropologist specializing in the locomotion of the first apes (hominoids) and early human ancestors (hominins). His expertise in the anatomy of the human foot and ankle has contributed to current understanding of the origins and evolution of upright walking in the human lineage.