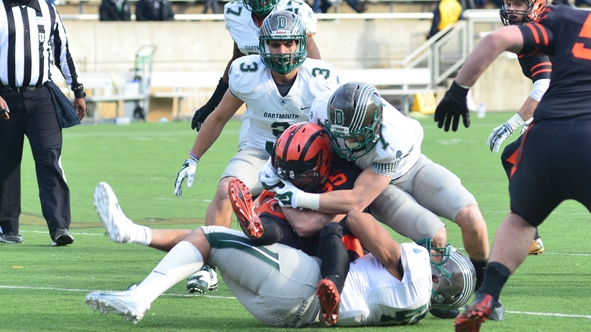 On Saturday at noon, in the last game of the year, the Big Green will take on Princeton at Memorial Field. (Photo courtesy of Dartmouth Athletics)

Dartmouth enters the final game of the season Nov. 21 with an opportunity to earn at least a share of the Ivy League title for the first time in 19 years. In order to lay claim to their 18th crown — more than any other Ancient Eight school — the Big Green will have to knock off a Princeton squad that hopes to play the spoiler. Don’t think for a moment the Tigers wouldn’t relish that role after the Big Green ruined their perfect run through the Ancient Eight two years ago on this very field, forcing Princeton to share the 2013 crown with Harvard.

While Dartmouth got the helping hand it needed last weekend to be in position to grab a share of the championship as Penn knocked off 12th-ranked Harvard, 35-25, the Big Green took care of their own business at hand with a 34-18 triumph at Brown.

Men’s Soccer Advances to Second Round of NCAA

With a mere seven seconds remaining in the first overtime period Thursday night, junior Alexander Marsh scored his first goal of the season to lift the Dartmouth men’s soccer team over Hartwick, 1-0, in the first round of the NCAA Tournament on a rainy Thursday evening on Burnham Field.

The Big Green improved to 12-5-1 and advanced to the second round, while the Hawks ended their season with an 11-6-3 mark.

“It was a great NCAA game,” Head Coach Chad Riley said. “The first game is always tricky. Hats off to Hartwick. You can see why they have won two Sun Belt titles. We were able to watch them play a lot leading into this and I have a lot of respect for them. They are very efficient in the attack and really tested our defense at times.  But I was very proud of how we handled the game as a team.”