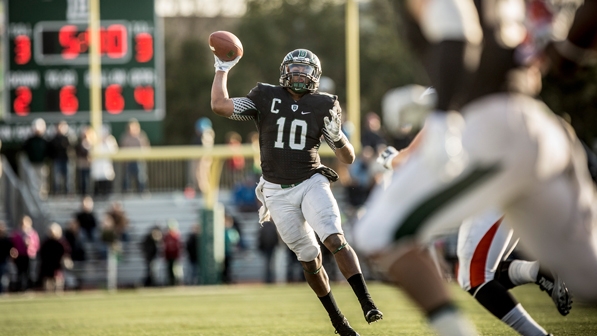 Quarterback Dalyn Williams ’16 finished his Dartmouth career by completing 31-of-45 passes for 262 yards and a touchdown in Saturday’s game to earn the victory and the Ivy League title. (Photo courtesy of Dartmouth Athletics)

Kyle Bramble caught a screen pass and weaved his way 12 yards to the end zone with 24 seconds to play, lifting 21st-ranked Dartmouth to a 17-10 victory over Princeton and keeping the Big Green on top of the Ivy League standings for a share of the conference crown on Saturday afternoon at Memorial Field. The 6,208 fans in attendance got to witness the first Ivy title for Dartmouth (9-1, 6-1 Ivy) since 1996 but 18th overall, more than any other school in the Ancient Eight.

Dartmouth, which had trailed for less than a total of 10 minutes all season, played from behind for a majority of the game. Down 10-7 to start the fourth quarter, the Big Green knotted the score when junior Alex Gakenheimer booted a 22-yard field goal with 4:54 to play. Twice the defense shut down Princeton following that field goal, once on a David Caldwell interception, the other on a Cody Fulleton sack on third down.

After Princeton punted away with just over two minutes to play, Dartmouth quarterback Dalyn Williams went to work, starting with a 23-yard pass to senior Ryan McManus. Eventually, the Big Green found themselves on the Tiger 12-yard line with 31 seconds to play when the coaching staff called for the screen pass. Williams drew in the defense before lofting his pass toward the left sideline to Bramble, who followed his blockers and just snuck into the end zone for the go-ahead score. With Gakenheimer’s PAT, Dartmouth enjoyed a 17-10 lead with 24 seconds to go.

Princeton was able to advance the ball to the Dartmouth 44, but when trying to spike the ball to stop the clock in the final seconds, the line was not set, leading to a false start penalty. Since the penalty was on the offense, the clock was run out leading to a rather anticlimactic end to the victory. But the reveling Big Green players did not seem to mind as they stormed the field even before the referees could announce the decision.