John Stomberg has been named the inaugural Virginia Rice Kelsey 1961s Director of the Hood Museum of Art, Provost Carolyn Dever announced today. He will begin work on Jan. 4, 2016. 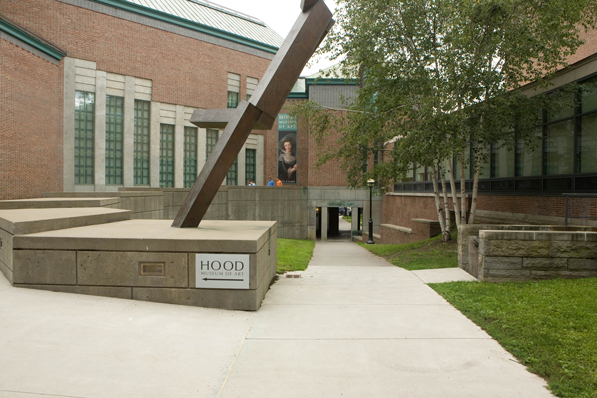 Widely regarded as a preeminent academic teaching museum, the Hood has one of the oldest and largest collections of art and artifacts in the United States, dating to 1772. (Photo by Joseph Mehling ’69)

“John is a strategic thinker with deep experience who has a tremendous ability to build relationships that inspire innovative, student-centered programming—everything we could ask for in a leader of the Hood,” says Dever. “I’m delighted that he will be joining the Dartmouth community.”

A specialist in American and European modernist art, Stomberg is no stranger to academic teaching museums. Currently the Florence Finch Abbott Director of the Mount Holyoke College Art Museum, which he has led since 2011, he also served as both deputy director and chief curator of the Williams College Museum of Art. He joined the staff at the Williams museum in 2002 as associate director for administration and programs.

Before Williams, Stomberg was assistant director and then director of the Boston University Art Gallery. He holds a BA from Georgetown University and an MA and PhD in art history from Boston University. He is a founding instructor at Hampshire College’s Institute for Curatorial Practice. 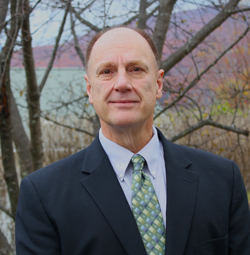 John Stomberg will being his role as the inaugural Virginia Rice Kelsey 1961s Director of the Hood Museum of Art in January. (Photo by Gary Westcott)

“Great art and great teachers change lives,” says Stomberg. “The Hood’s collections are historically deep and geographically wide, representing the world in all its diverse splendor. I look forward to leading the Hood well into the 21st century, a time we know will demand increasing global awareness among our students.”

At Mount Holyoke, Stomberg has focused on building collections and expanding educational programs, and through his efforts the museum has received major grants from the Institute of Museum and Library Services and the Andrew W. Mellon Foundation. Notably, he spearheaded an initiative funded by the Pierre and Tana Matisse Foundation for a three-year project called “The Museum as Catalyst for the Creative Campus,” a campaign to include innovation training in class visits and to develop new approaches to teaching with museum collections that help students engage purposefully with the world. The effort has enlisted widespread collaboration with Mount Holyoke faculty.

New Hood Exhibition Reveals Another Side of Canaletto’s Venice

The Hood directorship was endowed earlier this year in recognition of gifts from the Rev. Preston Kelsey II ’58 and Virginia Rice Kelsey. Stomberg takes on the role as the museum prepares for a major renovation that will increase its capacity to use its collections for teaching.

“The Hood advances the highest levels of liberal arts learning through object- and project-based training,” he says. “With its comprehensive collections, experienced staff, and expanded facilities, the Hood will be reasserting its leadership role in the field of experiential education while continuing to teach the complexity, aesthetic richness, and history of art.”

The $50 million expansion, designed by world-renowned architects Tod Williams and Billie Tsien, will enhance the museum’s ability to fulfill its teaching mission and includes a significant increase in the museum’s object-study and gallery spaces and a more welcoming and visible entryway from the Green. The Hood expansion is part of Dartmouth’s vision to establish an Arts and Innovation District on campus. This vision includes the 2012 dedication of the Black Family Visual Arts Center, the creation of the DEN Innovation Center and New Venture Incubator at Currier Place, and renovations in the Hopkins Center for the Arts.

“I look forward to working with the visionary architectural team of Tod Williams and Billie Tsien,” Stomberg says. “There could be no better match for the aspirations of the Hood Museum of Art.”

The search committee was chaired by Dean of Libraries and Librarian of the College Jeffrey Horrell and assisted by the search firm Russell Reynolds Associates.

Juliette Bianco ’94 has been serving as interim director of the museum following the departure in March of the previous director, Michael Taylor.

Widely regarded as a preeminent academic teaching museum, the Hood has one of the oldest and largest collections of art and artifacts in the United States, dating to 1772. The museum annually organizes more than 150 programs for college, public, and regional school audiences and mounts approximately 15 exhibitions.

Collection highlights include American and European prints, paintings, and sculpture as well as important holdings of ancient, Native American, African, Aboriginal Australian, and Melanesian art, and modern and contemporary art from around the world.