Turkeys came to England around 1500 by way of merchants trading in the eastern Mediterranean, or what was then the Turkish Empire. So we got turkeys from Turkey, right?

The Turks themselves thought turkeys originated in India—or the place that, at the time, they thought was India—the Spanish West Indies, actually.

So it wasn’t really India. The turkey’s circuitous route to the modern-day Thanksgiving table actually began in Mexico—west of the Spanish West Indies—where they had been domesticated, and where the Spanish and Portuguese explorers found the birds, which they promptly carried across the ocean.

A bowl from approximately A.D. 1000 in the Mimbres cultural tradition (in New Mexico) depicts domesticated turkeys. (Dallas Museum of Art)

These were domesticated fowl, not the wild turkeys so common in North America. Domestication occurred long before the Europeans arrived in the New World.

“The turkey was one of the most important domesticated animals in early Mexico and Central American, the others being dogs—domesticated during the Late Pleistocene—and muscovy duck,” says Deborah Nichols, the William J. Bryant 1925 Professor of Anthropology and an expert in Pre-Columbian civilizations. “Turkeys were raised for their meat, for feathers, for eggs, for sacrificial offerings, and as trade items. The turkey was also deified.”

Nichols, who is also the chair of Latin America, Latino, and Caribbean Studies, points to genetic evidence from turkey remains at the ancient Mayan city of El Mirador in Guatemala.

“Ancient DNA studies have opened a new door to understanding their domestication and significance,” she says. “They likely were as domesticated in Central Mexico, sometime between 300 B.C. and 100 A.D.”

There’s another twist to the turkey’s tale: During the same period, another domesticated breed appeared in the American Southwest, among the ancestors of the Pueblo Native Americans. Though genetically confirmed through the analyses of bones and droppings, the Southwestern turkey seems to have died out, leaving only the Mexican domesticate.

So it was the Mexican transplant—making the round trip from Mexico to the Old World and then into North America from Britain thanks to the colonists of New England and Virginia—that finally became the centerpiece of our Thanksgiving Day meal.

Firing Up the Distant Past, With a Handmade Kiln 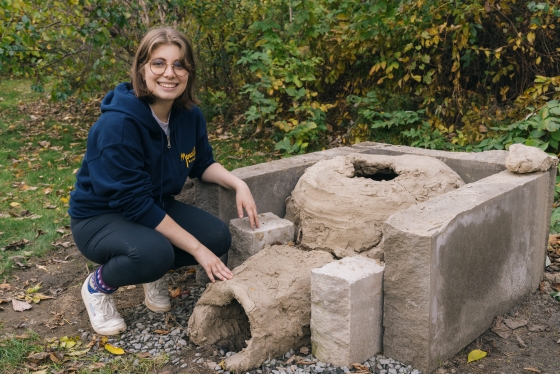 Beer was likely a staple food consumed by everyone and, at the same time, it was also ritually consumed on special occasions.