Jeffrey Horrell, dean of libraries and Dartmouth’s 18th librarian of the College, will retire at the end of June 2016 after 11 years at the helm of the library system, the College announced today. 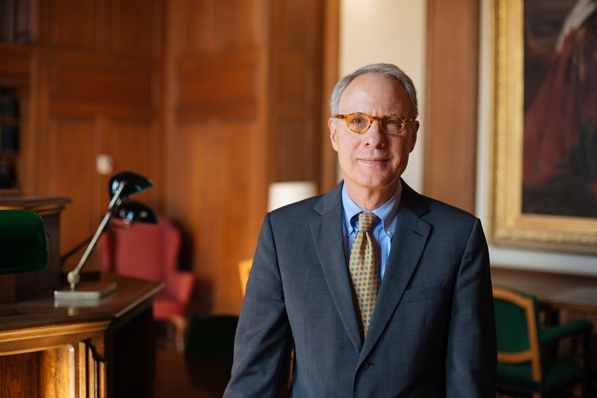 “I love coming to work every day, but one should not stay at a job like this for too long. Fresh leadership is very important,” says Dean of Libraries Jeffrey Horrell. (Photo by Robert Gill)

Directing the College’s nine libraries was Horrell’s second stint at Dartmouth. His first full-time library position, from 1981 to 1986, was as librarian of the Sherman Art Library. From Dartmouth, Horrell went to Syracuse University and then to Harvard University before coming back to Hanover. Now, after 40 years in academic libraries, Horrell says he’s looking forward to a retirement that will include new adventures.

“I love coming to work every day, but one should not stay at a job like this for too long. Fresh leadership is very important,” he says.

Dartmouth will soon begin a search for the next librarian of the College, and anticipates having the position filled in the summer of 2016.

“Great libraries, and great librarians, are the heart of any top research and teaching institution—and Dartmouth’s library system, under Jeff’s leadership, has been second to none,” says Provost Carolyn Dever. “His creativity and foresight have prepared the library well for the challenges of the 21st century, and his legacy will benefit faculty and students for years to come.”

Dartmouth’s nine libraries (see sidebar) have a staff of about 170 and close to 3.4 million volumes, a significant number of which are online. That’s up from 2.3 million when Horrell began as library dean. The libraries add about 40,000 titles to the collection each year.

The libraries’ circulation is between 300,000 and 350,000 volumes a year, with millions of electronic uses of articles each year. The library’s main Baker-Berry complex has as many as 10,000 visits a day and, during reading period and finals, when Baker-Berry is open 24 hours a day, there are often upwards of 600 students in the library after hours.

However, says Horrell, the best way to measure the success of a research library is not by statistics.

“It’s by the books that are produced from research at a library like Dartmouth’s. It’s by the scholar who is able to do her research in Rauner, or the faculty member who can write his article with information from the collection,” he says. “It’s not about how big you are, it’s about the ability to be able to navigate the resources, to be able to get the right information to the right user at the time they need it.

‘A Whole Team Who Support Each Other’

A great deal of what makes Dartmouth’s libraries successful is not always apparent to library users, says Horrell.

“What people don’t see is that someone in our acquisitions department or cataloging department or metadata department is working with someone who works as a subject liaison to ensure that access is possible even when you are in London or Beijing,” he says. “We have a whole team of people working together to support the campus research needs.”

Baker-Berry Library: Located just off the Green at the heart of campus, Baker-Berry is home to the humanities and social sciences collections, classrooms, study and social spaces, several academic centers, a letterpress studio, and more.

Dartmouth Library Depository: The depository, located off campus, houses an additional 500,000 library volumes. Also part of the library system is the College’s Records Management unit, which is adjacent to the depository.

Sherman Art Library: Supports the departments of art history and studio art and the Hood Museum of Art with print and digital resources, including an image database and a special collection of rare items. Located in Carpenter Hall.

During Horrell’s tenure, the Dartmouth libraries have joined a number of collaborative ventures.

Horrell has led the libraries through a time of physical change, as well. Probably the most visible change has been the transformation of the once-empty Baker main hall (where the card catalogs once stood) into a popular, comfortable seating area, complete with the King Arthur Café.

With support from the Manton Foundation, the ground floor reserve reading room, now called the Orozco Room and home to one of Dartmouth’s treasures, José Clemente Orozco’s mural cycle The Epic of American Civilization, was renovated in 2013, the same year the murals were designated a national historic landmark.

Library space has also been renovated in the Jones Media Center, the Paddock Music Library, and, with continuing support of the Feldberg family, in the Feldberg Business and Engineering Library. In addition, the Theodor Seuss Geisel 1925 Room was established in Baker Library.

Building is also being done virtually, including the creation of a digital library that will have available digitized copies of the unique materials in Rauner Special Collections Library so that rare books and manuscripts, as well as all Dartmouth dissertations and theses, can be available 24 hours a day—whenever a student is writing a paper. Close to 80,000 photos in the College archives are included in the digital formatting work.

“The Dartmouth Library, built on a strong service tradition, continues to evolve as a collaborative partner with our faculty and students. Our staff have an important role and responsibility in the teaching and research mission of Dartmouth,” Horrell says. 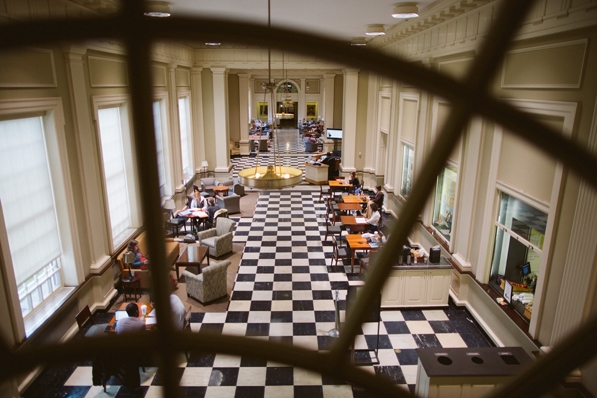 Probably the most visible change during Horrell’s tenure is the transformation of the once-empty Baker main hall into a popular, comfortable seating area. (Photo by Robert Gill)

In February 2005, Horrell came to back to Dartmouth from Harvard, where, beginning in 1992, he had served in a number of roles, including associate librarian of Harvard College for collections. Before that he was at Syracuse for six years, where his last position was assistant university librarian for personnel, budget, and planning.

Horrell has taught, consulted, and written a number of papers and reviews. He has also been active in many professional organizations, including as a member of the board of directors of BioOne, which publishes Elementa, Science of the Anthropocene; as past president of the Art Libraries Society of North America; a member of the Association of Research Libraries board of directors; a member of the Coalition for Networked Information steering committee; and on the Committee to Visit the Harvard University Library.

The announcement of Horrell’s retirement comes exactly 35 years from the day he interviewed for the Sherman Art Library position.

“From the day I got here in 1981, I realized what a very special place Dartmouth is,” he says.