In addition to their performance of Mozart’s Requiem and sections of The Magic Flute at their fall concert on Nov. 1, the students in the Glee Club premiered a composition by one of their own: a contemporary piece called Dream, written by the group’s president, Brian Chalif ’16. 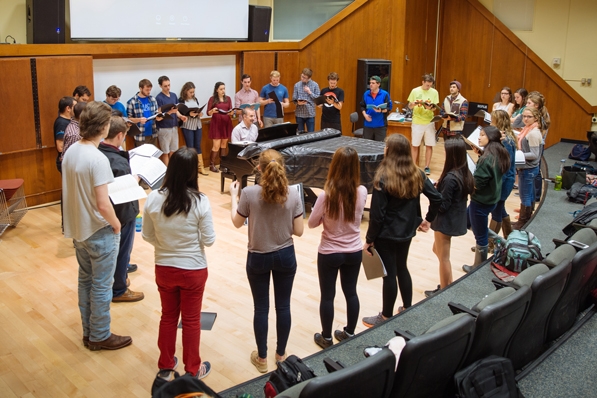 Directed by Louis Burkot, the Glee Club rehearses before its recent concert. (Photo by Robert Gill)

Chalif—a computer science and music double major from Huntington, N.Y., and a member of the Dartmouth Aires—says the piece, based on the text of Langston Hughes’ eight-line poem “Dreams,” grew out of an independent study with Estonian composer Toivo Tulev.

Tulev was at Dartmouth last year as a Fulbright visiting scholar at the invitation of Assistant Professor of Music Spencer Topel. Chalif had taken Topel’s composition seminar, and Topel arranged for Chalif to work with Tulev while he was in residence.

“It’s important to study with different people to get different perspectives on what it means to be a composer and how to go about your work,” says Topel. “Toivo is highly renowned for his intricate and complex choral writing, so I thought he would be a perfect match for Brian.”

Chalif had already begun to sketch ideas for a choral piece, but says he had hit a dead end until he started working with Tulev.

“Toivo told me to look for text. I didn’t know the poem beforehand, but my original conception of the piece had a lot of drone—a bass note that was there the whole time.”

The Hughes poem begins with the line “Hold fast to dreams,” and Chalif made the connection with the idea of holding fast to the musical notes of his composition.

“All the words are used in the piece at least once, but that line repeats a lot,” he says. The simplicity of the poem created a frame for his musical invention. “In one part, every line of the poem is getting sung at the same time, overlapping, and it makes a cool texture—a different experience for every listener, depending on where they’re sitting in the auditorium, even.”

The opportunity to compose for the Glee Club came about through several discussions with the choir’s director, Louis Burkot, who had seen early drafts of Chalif’s score.

“We looked at the core of it last year, and I had some people sing parts of it,” Burkot says. “I think he found immediately that what he had written didn’t work very well, so he went back to the drawing board. He was very methodical and pragmatic about it, the way you need to be. When he came back a second time I thought, wow, this is interesting.” 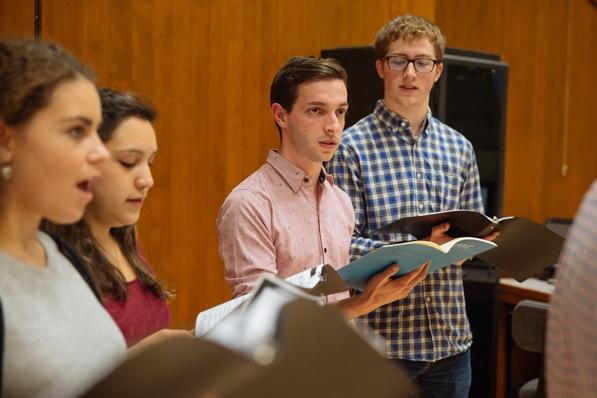 Composer Brian Chalif ’16, center, rehearses with fellow members of the Glee Club before their Nov. 1 concert, at which Chalif’s composition Dreams was performed in public for the first time. (Photo by Robert Gill)

On the day of the concert, Spaulding Auditorium was packed. Chalif says that Burkot “threw me a curveball when he asked me to say something about the piece, which he did not tell me beforehand. However, it helped the audience appreciate the piece more and understand what I was truly going for.”

“The piece has a clear vision from beginning to end, starting off with just these kernels of sound leading up in this big dramatic moment that tapers away again,” says Burkot. “The use of silence is also very effective, which is something modern composers try to capitalize on. The audience really enjoyed it.”

Hearing the piece come alive in front of an audience was “surreal,” Chalif says. “It was moving to hear such positive responses from friends, friends’ families, my own family, and my professors.”

“Hearing your music performed live is the most important kind of learning experience,” says Topel. “It’s critical to understanding how to write your next work. The music department is fully committed to nurturing the growth of composers.”

Two recent graduates of the department—Nick Chuaqui ’12 and Ryan McWilliams ’14, are studying with preeminent composers in the United States, Topel says. “I’m very pleased that Brian is joining this group of composers going on to do interesting things in music.”

“If Brian ever wants to go into composition he needs these kinds of experiences,” Burkot says. “That’s what Dartmouth can and should do—create these opportunities for students.”

Chalif will have another opportunity to see Dream performed for an audience when the Glee Club travels to Spain during the winter interim this year.

“The performance went so well and we put so much time into it, so I told Brian afterward, ‘Let’s take it to Spain,’ ” Burkot says. “The cathedral spaces we’ll be performing in will be a nice acoustic for it.”