President Hanlon Reflects on the End of Fall Term

As students prepared to leave campus for the fall interim break, President Phil Hanlon ’77 reflected on unrest at Dartmouth—and at institutions around the country—in an email he sent to faculty, students, staff, alumni, and parents of undergraduate students. 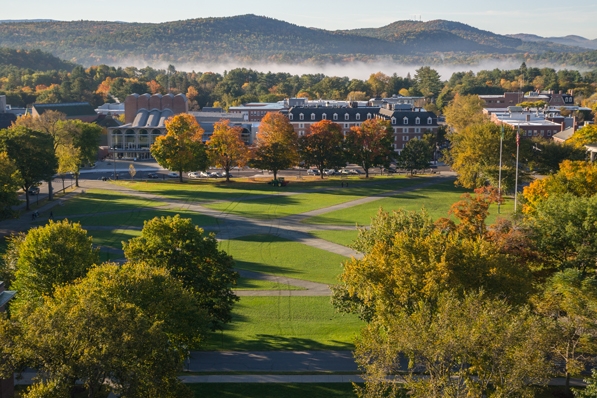 “We strive to balance freedom of speech with strong community values of civil discourse—though we recognize that at times these principles conflict,” President Hanlon wrote. “At their core, institutions of higher education are places where open inquiry and the free debate about difficult and sometimes uncomfortable ideas must thrive.”

The president’s email message followed almost two weeks of activity that began on Nov. 12, when a large number of students and Upper Valley residents held a demonstration decrying the vandalism of a student art installation marking the deaths of African Americans who were killed by law enforcement officers. The demonstration was also a statement of solidarity with campus demonstrations across the country.

After the demonstration, a smaller group of students walked through Baker-Berry Library shouting vulgar comments and insults at students who were studying in the library. A video of part of the library incident quickly went viral on the Internet.

The next day, Nov. 13, a Dartmouth student attending a conference at Brown University filed a complaint against Brown’s campus security, alleging the use of excessive force and racial profiling.

College officials are actively investigating the reports, Hanlon wrote in his letter.

“Such behavior is antithetical to our values and goals as an institution. As one of the great institutions of higher learning, we are committed to the open and energetic exchange of ideas,” he wrote. “And as Dartmouth’s citizenship pledge reminds us, we must treat each person with dignity and respect. Abusive language aimed at community members—by any group, at any time, in any place—is not acceptable.”

The president urged members of the campus community to use the coming break “to reflect on the fall term and return invigorated and committed more than ever to making our community strong and unified in purpose—even when we disagree—and rededicate ourselves to take on academic challenges and continue to tackle the world’s most vexing problems.”