Research Suggests GPS May Be Operating Inside Our Heads

Dartmouth’s Jeffrey Taube and Shawn Winter research the roots of GPS, but not the kind that depends on satellites orbiting the Earth. Rather, these neurobiologists study a system that resides in the brain, often referred to as an “inner GPS” that tracks our location within the environment. 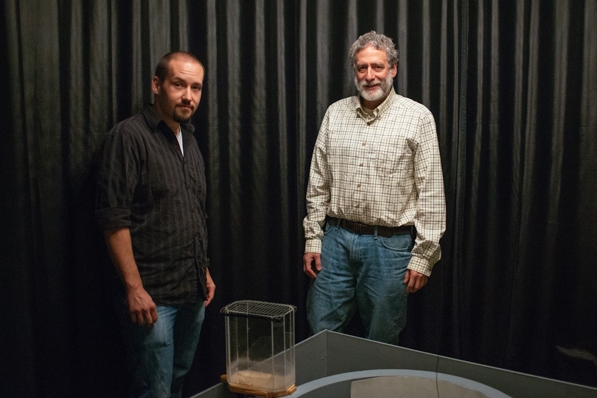 Postdoc Shawn Winter (left) and Professor of Psychological and Brain Sciences Jeffrey Taube study a system that resides in the brain, often referred to as an “inner GPS.” (Photo by Robert Gill)

“Many investigators believe that we maintain a mental representation or cognitive map of our environment and that we depend on this to navigate,” says Taube, a professor in the Department of Psychological and Brain Sciences.

Taube, postdoctoral fellow Winter, graduate student Max Mehlmen, and Ben Clark, Adv. ’10, are studying the activity of specialized brain cells—place cells and grid cells—that may form the foundation of the cerebral map. The discovery of place cells by John O’Keefe of University College London, and of grid cells by Norwegian neuroscientists May-Britt Moser and Edvard I. Moser led to the three scientists sharing the 2014 Nobel Prize in Physiology or Medicine.

Studies with rats by the Dartmouth scientists and their collaborators have shed new light on the operation of these cells. Their findings, appearing in the October issue of the journal Current Biology, contradict the prevailing opinion that grid cells actively track an animal’s location.

“Our results suggest grid cells may be more involved in tracking the distance traveled by the rat rather than its precise location within the environment,” says Taube.

“It is common knowledge that people with Alzheimer’s often have spatial disorientation. They don’t know where they are,” he says. “These individuals typically have abnormality in the brain areas where these cells are found, probably accounting for their problems with way finding.”

“These areas may serve as targets for therapeutic drugs that could alleviate some of the wandering behavior,” says Winter.

In their new study, the researchers also considered the relationship of grid cell function to an activity known as “theta rhythm,” which is exhibited in the electroencephalogram (EEG) activity. “Theta rhythm is controlled by the speed of an animal’s motion, and faster movement is associated with faster and stronger theta rhythm,” says Winter.

The researchers took their rats for a ride in a cart with transparent walls—like pushing someone around in a wheelchair. With this passive movement, grid-cell firing ceased and there were no changes in the theta rhythm related to the animals’ speed, the researchers found.