“Were they actually burying their dead?” a Dartmouth student asked famed fossil hunter Lee Berger about his discovery of more than 1,500 fossils of a new human ancestor in South Africa. 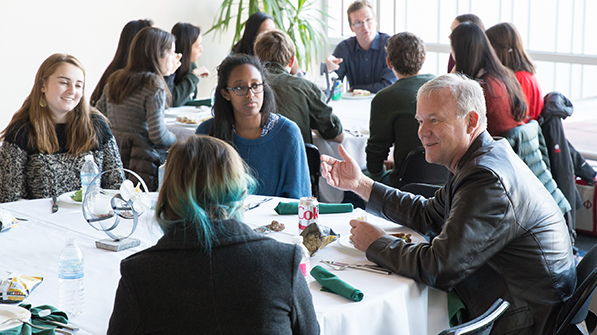 “We just don’t know. The evidence shows us that bodies were purposely and repeatedly placed deep in the cave,” said Berger, who was on campus at the invitation of Associate Professor of Anthropology Jeremy DeSilva, a member of the team that analyzed the newly discovered human ancestor, Homo naledi.

A research professor at the University of the Witwatersrand in South Africa and a National Geographic explorer-in-residence, Berger has attained rock star status among paleoanthropologists since the unprecedented fossil find in South Africa’s Rising Star Cave. News of the discovery was announced Sept. 10.

The story of finding Homo naledi is exciting, and master storyteller Berger made it real. He held the rapt attention of a series of audiences during the course of his Dartmouth visit.

“Almost Human—The Discovery of Homo naledi” was Berger’s presentation to more than 200 students, faculty, and guests at Filene Auditorium in Moore Hall on the afternoon of Nov. 16, when he recounted his tale of discovery.

In DeSilva’s introduction of the guest speaker, he said that many thought Berger lucky to have found the fossils. “However, the fossils were lucky to have been found by Lee,” he said, citing the broad, multidisciplinary approach to the excavation and analysis of the approximately 1,550 specimens, and the open channels of communication to the public.

A 10-year-old in the audience asked if any of the cavers were injured during the excavations of the fossilized skeletons, buried deep in the torturous recesses of the cavern. Berger told her of a lacerated leg and a crushed finger, injuries that could have proved lethal in the depths of the Earth, but happily did not.

Anthropologist: New Human Ancestor’s Feet Are Like Our Own

A Dartmouth student raised the question how old the H. naledi specimens were. Berger said the team did not know, but explained that a vast array of new technologies were being pursued by experts in radioactive measurement in an effort to fix the fossils in prehistoric time.

The following day, Berger and DeSilva joined 16 undergraduate anthropology students for a lunch meeting at the Hopkins Center for the Arts. Between bites of his sandwich, Berger took questions from the students at his table. At a nearby table, DeSilva also answered questions.

The two scientists fielded questions about the anatomy of the fossils, the range of variability within the population, their sizes, and inferred behaviors having to do with diet and language. Berger spoke about the practice of exploration, geological dating, and excavation at the site itself.

In a discussion about career aspirations with the students, Berger stressed the importance of a liberal arts education. “Take your time to find what you like,” he told them.

Though he describes himself as “the last person on the planet to discover Google Earth,” he is a strong advocate of using such technological resources in exploration, and talked about using this and satellite mapping in his search for new fossil sites.

Berger noted the importance of openness and communication with the public. “Scientists have not fully accepted responsibility for communicating science to those who own it—the people,” he said. 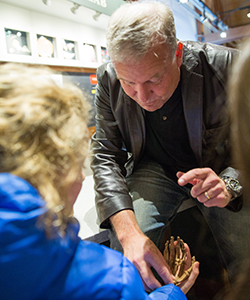 Visiting fossil hunter Lee Berger talked about the fossils with “the next generation of scientists” at the Montshire Museum of Science in Norwich, Vt. Berger and Dartmouth’s Jeremy DeSilva presented the museum with a donation of replica casts of an H. naledi skull, hand, and foot. ( Photo by Robert Gill )

An emerging path to communication is through social media, he said. “This is a challenge to the traditional ponderous, peer-reviewed papers. A paragraph on Facebook may be as powerful as a paper in Nature. This represents a generational change.”

From lunch with the students, Berger moved on to the Montshire Museum of Science in Norwich, Vt., where he met with more than 100 community members, mostly youngsters and their parents.

Obviously delighted to be talking to “the next generation of scientists,” Berger assumed the role of pied piper of paleontology. He introduced DeSilva as part of the team, and together they presented the museum with a donation of replica casts of an H. naledi skull, hand, and foot.

“I am passionate about communities that embrace science,” said Berger, referring to the crowd at the Montshire and another he met earlier in the day during a visit to Hanover High School. “We are engaging classrooms around the world, sharing the excitement of the process of discovery.”

The children threw questions at him very much like those he encountered from faculty and college students earlier in his Dartmouth visit. Berger answered them all until his voice finally gave out, and he turned the conversation over to DeSilva.