Two Dartmouth faculty members have been selected as 2015 Fellows by the American Association for the Advancement of Science (AAAS), the world’s largest general scientific society and the publisher of the journal Science. 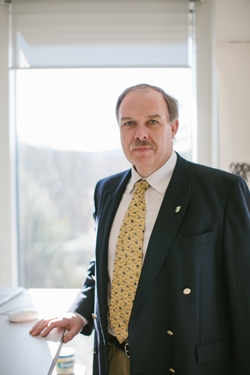 Ian Baker is the Sherman Fairchild Professor of Engineering, senior associate dean for academic affairs at Thayer, and director of the Dartmouth Center for Cancer Nanotechnology Excellence. (Robert Gill)

Professors Ian Baker and Andrew Friedland are among the 347 new Fellows recognized by AAAS this year for their distinguished efforts to advance science.

“The honor bestowed upon Professor Baker and Professor Friedland by one of the preeminent scientific organizations in the world recognizes their achievements as scholars, researchers, and teachers,” says Provost Carolyn Dever. “This achievement reflects positively not only on these extraordinary individuals, but also on the entire institution.”

He joined the faculty of Thayer School of Engineering in 1982 and is the Sherman Fairchild Professor of Engineering, Thayer’s senior associate dean for academic affairs, and director of the Dartmouth Center for Cancer Nanotechnology Excellence.

Baker obtained a BA and PhD in metallurgy and science of materials from Oxford University. His research focuses on metals and ice, including the physics of polar snow, firn, and ice. His most recent initiative involves the development of iron nanoparticles for cancer treatment. Additional ongoing projects in metals research include developing a series of high-strength magnetic materials. (Magnets that work and stay strong at high temperatures have many applications, such as for power-generation systems.)

“I am thrilled, inspired, and surprised to be elected a Fellow of the American Association for the Advancement of Science,” says Baker.

“This is clearly a well-deserved recognition for Ian,” says Thayer Dean Joseph Helble. “His major contributions are in an unusually broad range of areas, from the development of novel high-temperature materials, to understanding the microstructure of ice, essential for the reconstruction of past climate conditions, to most recently developing nanoscale materials for cancer treatment. He has also been an outstanding contributor in the classroom, particularly as a long-standing teacher of our project-based ‘Introduction to Engineering’ class.” 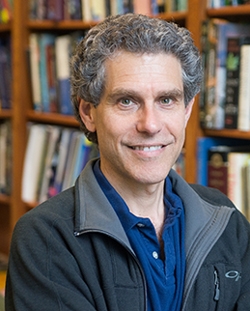 Friedland was cited “for comprehensive studies of lead as an airborne pollutant in northeastern forests, and the distribution of lead, carbon and nitrogen in forest soils.”

As the Richard and Jane Pearl Professor in Environmental Studies and a faculty member in the Environmental Studies Program, Friedland teaches courses in environmental science, energy, forest biogeochemistry, global climate change, and soil science. He has studied the effect of air pollution on high-elevation forests of the northeastern United States and the impact of increased demand for wood as a fuel, and the subsequent effect on carbon storage in forest soils.

Friedland has taught one of Dartmouth’s first massive open online courses (MOOCs), “Introduction to Environmental Science.” He worked closely with a host of collaborators—including instructional designers, librarians, videographers, and graduate and undergraduate students—to put together the class.

“I am honored to receive this recognition from AAAS,” says Friedland. “My work exploring human impacts on forested ecosystems and explaining environmental science to broader communities is very rewarding to me. I’ve collaborated with many colleagues and students in this work and all of us are being acknowledged by this honor.”

“I am delighted to see that Andy’s work is being recognized by AAAS with this highly merited honor,” says Elizabeth Smith, the Paul M. Dauten Jr. Professor of Biological Sciences, associate dean for the sciences, and a professor in the Molecular and Cellular Biology Graduate Program. “Given heightened concerns about global warming, energy, and the environment, his work on the carbon cycle and lead distribution in northern forests and the implications of harvesting wood as a fuel source has only increased in significance and relevance since his initial appointment to the Dartmouth faculty.”

New Fellows will be presented with an official certificate and a gold and blue (representing science and engineering, respectively) rosette pin on Saturday, Feb. 13, at the AAAS Fellows Forum during the 2016 AAAS Annual Meeting in Washington, D.C.

Additional Dartmouth faculty (active and emeriti) who are AAAS fellows: