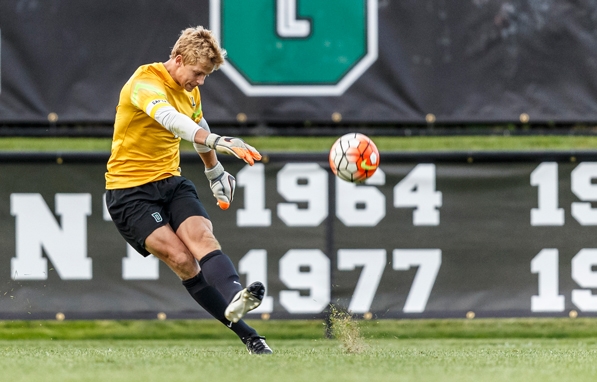 For the second consecutive year, the men’s soccer Ivy League Championship will remain in Hanover, as Dartmouth defeated Cornell, 2-0, at Burnham Field Saturday to win the title.

For the Big Green, it’s the 11th conference championship, which also earns Dartmouth the automatic bid to the NCAA College Cup Tournament. With the victory, Dartmouth improves to 11-4-1 overall and 6-0 in the Ivy League. The loss drops the Big Red to 4-11-1 and 2-4-0 in conference play.

“Obviously you’re so proud of your team,” says Big Green Men’s Soccer Head Coach Chad Riley. “They’ve worked so hard and we haven’t had a bad practice all year. I think that’s such a credit to them. Individuals can sometimes win you games, but the only thing that wins championships is a squad. We’ve had 29 guys who have been so focused and committed to the program. On the outside it might look like it’s easy, but we’ve had adversity and we’ve battled through it.” 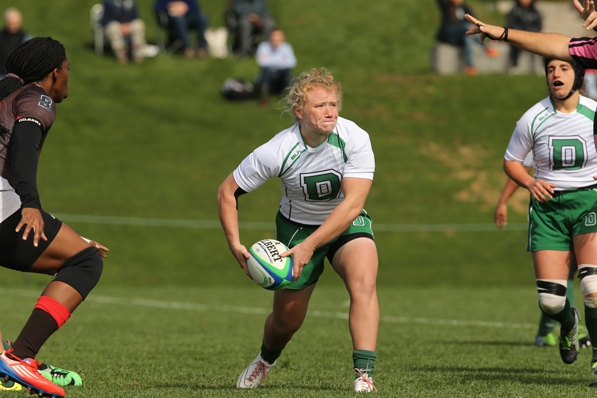 The Big Green (7-1) scored all 19 of their points after halftime, with Audrey Perez’s try in the 82nd minute breaking the 12-12 tie and giving Dartmouth the title. The try and conversion came in extra time and proved to be a back-breaker for the Bears (5-2) who were unable to hold off the resurgent home team during the Nov. 8 game.

“The conditions played a big role today,” says Head Coach of Women’s Rugby Katie Dowty. “It was really difficult to play out of our end and into the wind today, but after halftime, we still felt fresh and now we had the wind at our backs. That made us believe we could overcome a 12-point deficit.

“We really put it together this week,” Dowty added. “The focus was great but our self-belief really kicked into effect.”

Brown carried a 12-0 lead into the break thanks to a try each from Uzo Okoro and Kiki Morgan with a conversion from Rebecca Dahle on the game’s opening score.

However, where the Bears were successful in the first match-up between these two teams earlier this fall—a strong defense near the tryline—was what proved to be a weakness on Sunday.