Mrynna Cervantes ’16 grew up in El Centro, Calif., not far from the Mexican border. But though her family is Mexican-American, she says she never learned about Mexican history until she came to Dartmouth. 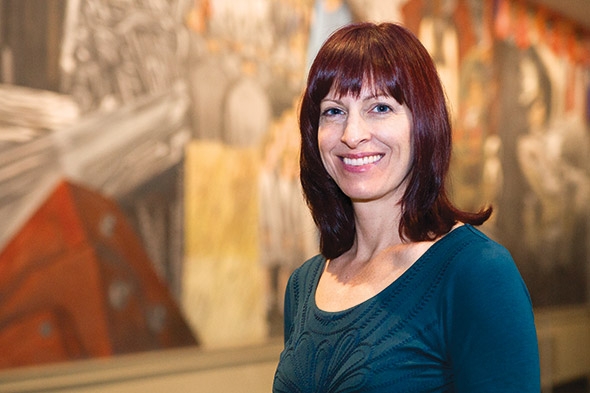 “This time I wanted to do something different. It’s not a class typically taken by art history students, so I thought, why not give students options?” says Associate Professor of Art History Mary Coffey of her approach last spring to her course “Art History 72: Mexican Muralism,” which focuses on three major Mexican artists of the early 20th century. (Photo by Eli Burakian ’00)

“There’s not much Mexican history in the California curriculum,” says Cervantes, who is majoring in government and minoring in education.

That’s one reason she took “Art History 72: Mexican Muralism” with Associate Professor of Art History Mary Coffey last spring—a course that focuses on three major Mexican artists of the early the 20th century, including José Clemente Orozco and his Epic of American Civilization, painted in the 1930s in Baker-Berry Library’s reserve reading room. (Orozco’s mural was designated a national historic landmark in 2013 and is preserved with the support of the Manton Foundation.) The course not only helped Cervantes learn about the early 20th-century art movement through the lens of politics, class, race, and gender, but also gave her the opportunity to develop a curriculum that uses the Orozco mural to teach Mexican history to middle school students back in California.

Cervantes could do this because, for the first time last year, Coffey structured her course so that students—especially those majoring in disciplines other than art history—could bring to bear expertise from their own fields to their final project.

“In the past students wrote short assignments interpreting a panel of the mural to post on the Digital Orozco site,” Coffey says, referring to the online project, built in collaboration with the Hood Museum of Art and the Neukom Institute for Computational Science, that documents the entire mural (funding for the site was also provided by the Class of 1960 and the Andrew W. Mellon Foundation). “This time I wanted to do something different. It’s not a class typically taken by art history students, so I thought, why not give students options?”

Coffey’s goal was to have students identify a project, ideally one that comes out of their disciplinary location—and apply that to a term-long research project on the Epic of American Civilization. The result: a kind of intellectual creativity that extended far beyond the typical term paper.

One student, a computer science major, developed an app in which users could click on an image from the mural to learn more about the mythology behind Orozco’s images. A studio art major studied Orozco’s preparatory drawings and notes, then created a gouache painting interpreting the mural’s major themes. A philosophy major applied Hume’s analytical philosophy to defend the mural from its contemporary critics.

Bridget-Kate Sixkiller McNulty ’16, a history and classics double major and the general manager of the Dartmouth radio station, created a playlist of music that visitors to the Orozco mural could listen to while viewing the painting.

“I wanted to make the mural more cinematic—so you’re not just looking at it, but hearing and feeling,” Sixkiller McNulty says. “I was trying to make people have an emotional connection to it.”

She based her selections on research on the themes of the mural’s panels, she says. The playlist ranges from music Orozco himself might have known, such as Mozart’s Requiem, to a piece by modern classical composer Lou Harrison called “Song of Quetzcoatl,” to Pink Floyd’s “Another Brick in the Wall,” inspired by the mural panel “Gods of the Modern World”—“the one with all the skeleton teachers,” she says.

Sixkiller McNulty created more than a dozen drafts of her playlist. “My poor friends—I made them walk around the murals with my iPod. I’d be like, ‘Tell me how you’re feeling—does this make you want to start a revolution?’ ”

Of the opportunity to bring her passion for music to an art history course, she says, “Music is my first association with everything and anything. So being able to use that association in an academic setting was really exciting.”

Eamon Murphy ’17, a history major from Greenwich, Conn., did his research on William Blake’s influence on Orozco. “There was a brief mention in one of our readings about how Orozco’s style was influenced by Blake, and I was like, wait, why?”

For his project, “there were three concepts I was trying to combine: Orozco, Blake, and this form of architecture and design called dynamic symmetry,” he says. While scholars have written about each of these topics, he could not find anything putting them together.

Finally, he had an insight about the panel of the Orozco mural called “Modern Industrial Man,” which shows a laborer reading a book, and beside him a hammer standing on its head.

“I always thought it was esoteric; it doesn’t make any sense,” Murphy says. “But then I found an image of one of Blake’s mythical god figures—the spirit of human independence and creativity and consciousness and soul—and his symbol is an upside-down hammer. That helped me understand what the Orozco panel is about. It was a great moment of clarity for me.”

“Eamon makes an interpretation of the final sequence in the mural that I think is novel and very compelling,” says Coffey. “That’s the best thing you can hope for in a class—that a student brings something new to your attention.”

“What I take away from the experience is that it’s entirely possible, even if it is difficult, to blaze your own trail and find out something that maybe even the expert would not have realized,” Murphy says. “I didn’t understand how many nooks and crannies there are that are just completely unexplored. It’s one of the cooler things I’ve done academically, ever.”

Cervantes developed her curriculum project with an audience in mind: She was to spend the summer teaching middle school students in San Juan Capistrano, Calif., through the Breakthrough Collaborative, a program that helps prepare talented low-income students for college. While in the end Cervantes did not get to teach her Orozco curriculum, she says the project helped prepare her for the summer.

In developing her project, “I had to have a very clear idea of what I wanted my students to learn from each lesson, and what I wanted them to learn overall,” Cervantes says. “I definitely transferred that to teaching a college-skills course this summer—that skill of having the big picture for my students and trying to break down how I’m going to get them to learn each concept.”

Coffey says she was impressed with Cervantes’ clarity and independence. “She was very clear from day one about how she would frame the project, which was hardest for most students. She had a very clear sense of the parameters, and within that structure there were infinite possibilities.”

“I take a lot of government and education courses, and there is so much overlap”—cross-disciplinary connections that she doesn’t always have the opportunity to explore thoroughly, Cervantes says.

Coffey says this kind of exploration was exactly what she wanted her students to do.

“I wanted them to define their own intellectual engagement with the project,” she says. “I don’t need to tell them how they need to engage this monument; it’s a living thing. I wanted to help them take ownership of their experience with the mural and make it their own.”