Dartmouth has received a $1.2 million grant from Carnegie Corporation of New York to support and expand a fellowship program that is bridging the gap between theorists and practitioners in the field of international relations. 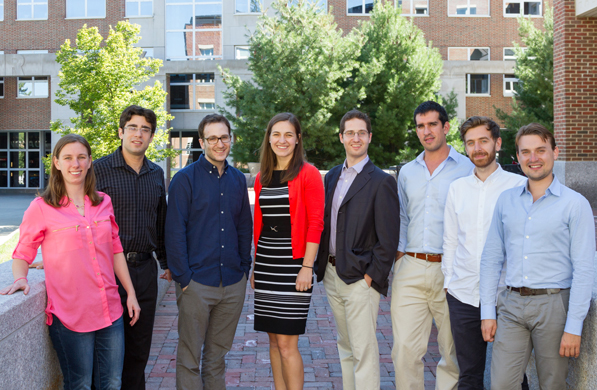 The grant will provide most of the funding for the College’s U.S. Foreign Policy and International Security Postdoctoral Fellowship program for the next three years, while Dartmouth establishes an endowment to permanently sustain the initiative. It has also allowed for full implementation of the program, increasing the number of fellows from six to eight and establishing a series of events in Washington, D.C.

The College has funded the program, a collaboration between the John Sloan Dickey Center for International Understanding and the Office of the Dean of Faculty, as a pilot project for the past three years. Fellows conduct research on topics of importance in American foreign policy and security with the goal of strengthening connections between academics immersed in the study of international relations and policy makers working in government.

“Dartmouth is committed to improving the lines of communication between policy makers and academicians across the nation who are doing outstanding research on matters related to security and foreign policy,” says President Phil Hanlon ’77.

“We are already recognized for the Dickey Center and for having one of the best international relations undergraduate programs in the country. Through this fellowship program, we are taking a leadership position in helping shape public policy through academic research. We are grateful for this Carnegie Corporation grant, which will strengthen our program while the College secures funding for its endowment.”

Two government faculty helped secure the grant and will work with the program’s fellows. They are Associate Professor Daryl Press and William Wohlforth, the Daniel Webster Professor of Government and faculty adviser to the fellows.

“The Carnegie Corporation’s assistance is helping us build the best postdoc program of its kind in the world. Given the international challenges this country faces and the growing gap between policy and academe, the timing could not be better,” says Wohlforth.

In addition to research and assisting with lectures, program fellows will contribute to a new version of Wohlforth’s “Violence and Security” class, which will be offered during the spring 2016 term.

“One of the exciting aspects of this program is that the fellows simultaneously work with faculty members on current research and mentor undergraduate students,” says Michael Mastanduno, dean of the Faculty of Arts and Sciences. “Because they occupy that space between students and faculty, they’re in a position to work with everyone on campus and contribute to a more dynamic intellectual community.”

The fellows work to develop skills to help them connect with foreign policy experts, gaining experience in writing opinion pieces, publishing, producing video, and networking. Over the course of their year at Dartmouth, they have the opportunity to meet with top policy makers. Former Secretary of State Madeleine Albright and former CIA Deputy Director Michael Morrell are among those who have met with fellows in the past two years.

During its pilot phase, the program has brought six young scholars to Dartmouth for one-year resident fellowships.

“In less than three years we have created a robust fellowship program that is giving brilliant young people who are passionate about international policy the opportunity to study issues such as security, health, and the environment—and we’re engaging policy makers in D.C.,” says Daniel Benjamin, the Norman E. McCulloch Jr. Director of the Dickey Center and former coordinator for counterterrorism at the U.S. State Department. “This is the fundamental purpose of these fellowships: to provide rigorous research that will inform decision-makers in Washington and beyond.”

With Carnegie support, the program will fund eight positions each year, provide each fellow with a research budget, and facilitate connections between Washington, D.C., and other university programs through conferences, workshops, and the network of fellowship alumni. Here are the fellows for the 2015–2016 academic year:

Daniel Altman’s research topics include coercion, deterrence, causes of war, misperception and war, and nuclear proliferation. He is working on a book examining how states make unilateral gains by exploiting ambiguities in deterrent red lines.

Daniel Bessner focuses on U.S. foreign relations, cultural and intellectual history, U.S.–European relations, Jewish studies, and the history of human sciences. He is working on a book manuscript, Democracy in Exile: Hans Speier and the Rise of the Defense Intellectual.

Kate Geoghegan’s research is focused on U.S.–Soviet relations, the role of non-governmental actors in U.S. foreign policy, and the rise of democracy assistance as a tool of U.S. influence abroad.

Mauro Gilli is researching the challenges of imitating military technology—in particular, how the “advantage of backwardness” has changed since the Second Industrial Revolution.

Alexander Lanoszka is completing a book about security guarantees and nuclear proliferation, and beginning research on the Warsaw Pact and nuclear balance in the last decade of the Cold War.

Kathleen Powers’ research examines the intersection of international conflict and cooperation, foreign policy, political attitudes, and social identity. She is developing her dissertation, which focuses on social relations at the foundation of national and transnational identities and their implications for foreign policy preferences, into a book manuscript.

Joshua Shifrinson is completing a book that analyzes how states respond to the decline of other great powers. His research focuses on power transitions, American grand strategy, and the intersection of international relations theory and diplomatic history.

Simon Toner will continue researching the development, vision, and policies of the South Vietnamese state during Nguyen Van Thieu’s presidency. He also will begin a new project that explores American perceptions of and response to urbanization in the Global South during the Cold War.