The Hood: ‘Fully Engaged’ Throughout Construction

Asked what he thinks about joining the Hood Museum of Art just before a $50 million expansion and renovation project begins, incoming Virginia Rice Kelsey 1961s Director John Stomberg laughs. “You mean, what’s wrong with me?” 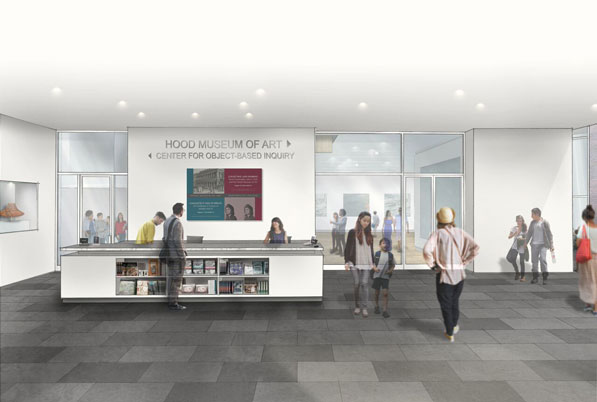 The new director, who starts work on Jan. 4, is full of ideas about how the Hood can remain a vital part of campus life during the construction period. Implementing these ideas will begin, he says, while the museum is still open this winter.

“This term is going to be a celebration of all of the things the Hood does now,” Stomberg says. “We will be planning some special programs for the wrap-up season, and it won’t be the normal fare. I’m hoping to close with a bang.”

Stomberg and the museum’s interim director, Juliette Bianco ’94, are encouraging community members to visit the museum before construction begins. “People should come in and have one last, long look at this great building that’s served us so well, because it will not look the same,” Stomberg says.

Two exhibitions will be on view beginning in January: a showing of contemporary artist Eric Aho’s Ice Cut paintings and an exhibit of the Hood’s recent acquisitions in contemporary African art.

“We’ll be going full steam until the moment we close down the galleries,” says Stomberg.

Read more about the expansion and renovation of the Hood.

How to Close a Museum

But when winter term ends in mid-March, everything in the museum must be inventoried and packed for transport to a secure storage facility.

“In a sense it’s like moving from a house you’ve lived for 30 years—you have to make sure that when the closing date comes, the place is empty,” says Bianco.

Hood Museum of Art: Much to See and Much to Learn

Exactly like that—if your home contains priceless artifacts that are fragile and sensitive to changes in temperature and light. The museum has hired specialized movers and is preparing customized containers to ensure that each object in the collection travels safely.

The most challenging objects to move include three-dimensional pieces made of delicate materials, as well as photographs and works on canvas whose surfaces need protection, says Bianco.

“And there’s almost no such thing as an ancient Greek pot that hasn’t had some repairs over however many of thousands of years, so we have to make sure that repairs are stable,” she says.

By August, the museum will be completely empty and ready for construction to begin.

Art in the Interim

While the Hood is closed, 47 works from its collections will be on loan in 17 museums around the country.

“The loaned works will be treated as honored guests, and will be on view the entire time we will be closed,” says Stomberg. The closest to campus will be at the Currier Museum of Art in Manchester, N.H.

In Hanover, plans are in the works for special programs, including guest lectures, exhibitions in alternative spaces around campus, and a vital online presence. Educational programming for area k-12 schools will continue in Wilson Hall.

During the closure, the Hood staff plans to further develop the museum’s online catalog. “Increasing digital access is a big goal,” says Bianco. Students and faculty will continue to be able to use the online catalog for research.

There will also be many opportunities for Dartmouth students to take part in museum projects, Stomberg says. “We will be fully staffed during this time, and that includes student interns. The curatorial and academic outreach staff will be preparing for ongoing projects and for the reopening—we’ll keep people busy.”

The museum will reopen with two major exhibitions, yet to be announced. “We’ll be reopening during the College’s 250th anniversary, so we’ll be making plans for a big celebration.”

In the meantime, Stomberg says, “It’s important that faculty, students, families, and alumni know that the Hood and the Hood staff are still here and fully engaged.”