Since a last-minute rush of donations brought the Dartmouth United Way campaign to within $38,000 of the $295,500 goal, organizers announced that pledges will be accepted until December 23, the start of the holiday break. 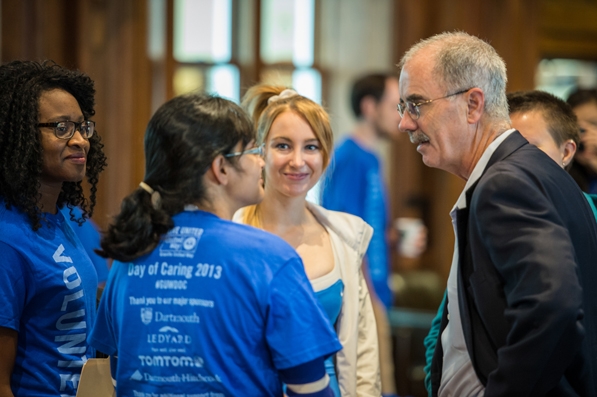 President Phil Hanlon ’77 speaks with students involved in the United Way Day of Caring, in which many students, faculty, and staff spend time volunteering around the Upper Valley. (Photo by Jacob Kupferman ’14)
Image

“We are so close, and there is such a sense of excitement this year, we hope that by offering donors one more week to have their pledge count toward this year’s campaign might just get us over the finish line,” says Gail Gentes, United Way campaign co-chair.

Dartmouth faculty and staff will continue to be able to do payroll deduction donations and make one-time gifts for the campaign until the holiday break, says Gentes. After that date, payroll deductions will no longer be possible, but one-time pledges can still be made by phone or online.

Patrick Tufts, president and CEO of Granite United Way says Dartmouth has been a longtime, dedicated partner to the United Way, which provided financial support in the Upper Valley to 40 critical not-for-profits last year. United Way has been serving New Hampshire and Vermont since 1928, he says.

“Thank you to all at Dartmouth College who have so generously supported United Way,” Tufts says.

“For those of you who haven’t had the chance to give yet, your gift would support local agencies serving over 300,000 of our friends, neighbors and family members. Your gift helps all year long, not just once,” Tufts says.

And giving to the United Way makes your money go further, says Tufts. For every $1 donated to United Way the organization and its partners are able to leverage an additional $1.60, he says.

“What better way to make the giving spirit of the holidays last all year round,” Gentes says.