This year’s annual holiday show at the Hopkins Center for the Arts, The Christmas Revels: A Scottish Highlands Celebration of the Winter Solstice, is based on the magical Celtic tale of Tam Lin, written by celebrated children’s author Susan Cooper. It’s a merry show of Scottish singing, dancing, and pageantry by a cast of 75 area residents of all ages, as well as some of New England’s finest Scottish musicians and a California-based Highland dancer. 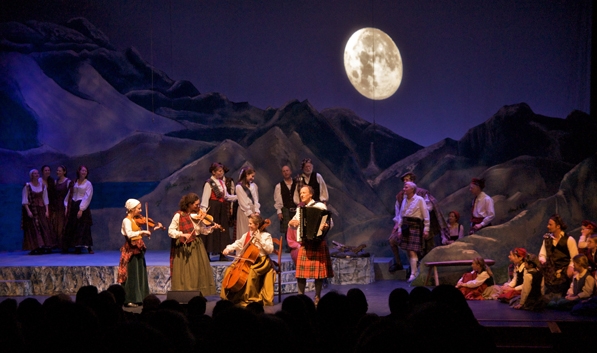 This year’s show has a cast of 75 community members of all ages. (Photo courtesy of the Hopkins Center for the Arts)

The production runs Thursday, Dec. 17, through Sunday, Dec. 20, in Spaulding Auditorium at the Hopkins Center.

Many Dartmouth employees have family members in the cast of this year’s show, such as David Ricker, associate director of Data Warehousing and Business Intelligence, whose wife, Melinda, and daughters Karina and Erin are singing and dancing; Steven Pyle, a staffer in the Department of Biomedical Data Science, whose wife, Simone, and daughter Charlotte are singers in the adult and teen choruses; Michael Zens and Christina Robinson, an epidemiologist and a project coordinator, respectively, at the Geisel Medical School, whose daughter Marian Zens is a member of the teen chorus and in the cast of the “mummer’s play,” a traditional skit of tomfoolery that’s always a part of the Christmas Revels show; and Deborah and Stephen Brooks, both associate professors in the government department, whose daughter Riley is in the children’s chorus.

As always, Christmas Revels shows involve large casts who need to move on, off and around the stage in interesting ways as they execute the music, dance and pageantry that’s part of this annual winter holiday treat.

It can be a substantial commitment when kids are young, as parents are enlisted to keep the large children’s chorus calm, fed, hydrated, and happy during long rehearsals and performances. That began in 2006 for Barbara Masteller, communications production manager in the Office of Advancement. Her daughter Emily was in her first Revels as a third-grader in ’06. Now a senior at The Sharon Academy in Sharon, Vt., Emily is an alto in the adult chorus of this year’s show. “Revels has been a huge part of our lives,” says Masteller. “It’s been transformative for Emily. Revels shows what great things can happen when you’re in a really supportive environment. She has made life-long friends, and that includes really strong relationships with adults as well as other young people. Plus, she’s had the chance to work with amazing guest musicians and dancers.”

Watch a video of some of the cast signing carols during Friday’s ceremony marking the lighting of the Christmas tree on the Green: 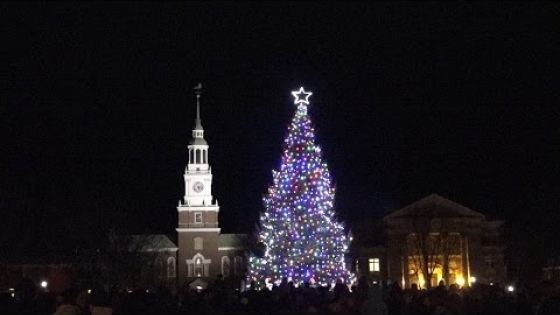