Capping off a day in New Hampshire by campaigning at Dartmouth Wednesday night, Bill Clinton pitched his wife, Hillary Clinton, as the most accomplished agent of positive change in the 2016 presidential race. 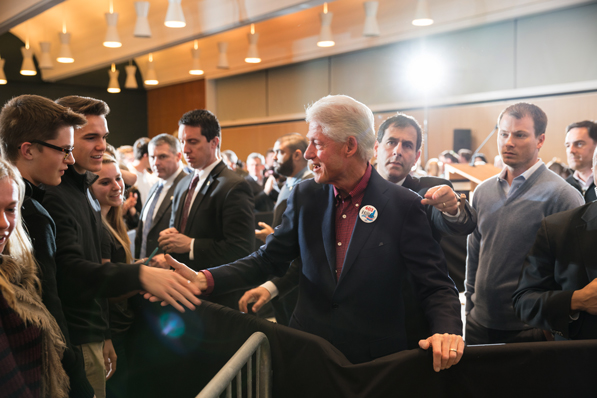 After speaking Wednesday night in Alumni Hall in the Hopkins Center for the Arts, former president Bill Clinton greets students and other members of the community. (Photo by Eli Burakian ’00)

“If you support Hillary you’ll get somebody who can find common ground and who can stand her ground. … Just look at the 11-hour Benghazi hearing if you want to see what I mean,” said the former president to applause.

He said Hillary Clinton has a comprehensive economic plan, that as former secretary of state she has broad national security and foreign policy credentials, and that she would work to bring Americans together and end the rancor and divisiveness in the country today.

“We need a grown-up in the room,” Clinton said, stirring more applause from the Dartmouth students and members of the public who filled Alumni Hall in the Hopkins Center for the Arts.

The campaign event, which was not sponsored by the College, drew a crowd of some 700 people, with several hundred of those watching on video from the Hanover Inn ballroom.

Clinton spoke at events at Keene State College and in Claremont before the evening appearance at Dartmouth. The Clintons’ daughter, Chelsea, also made appearances in the first-in-the-nation primary state this week, where some polls show Vermont Sen. Bernie Sanders pulling ahead of Clinton in the Democratic presidential race. Sanders is scheduled to speak at a Dartmouth town hall event today.

A white-haired Clinton spoke for more than an hour Wednesday and afterward worked a rope line, shaking hands, posing for selfies, and signing autographs for 20 minutes before leaving the building.

Clinton spoke without notes, running through his wife’s lifetime of public service, from her work as secretary of state to patch up faltering peace talks in Northern Ireland, to her undercover work with the Children’s Defense Fund right out of law school. The Children’s Defense Fund sent her to Alabama, where she posed as a mother searching for a “white school,” he said. The sting operation was designed to expose a system of private academies that had cropped up in Alabama and across the South to circumvent federal desegregation orders.

Charlotte Blatt ’18, vice president of the College Democrats, and a volunteer with the organization Dartmouth for Hillary, said she had met the candidate and gotten a picture with her when she spoke on campus in November.

“It is so wonderful to interact with the candidate you plan to vote for,” Blatt said. “A big part of why I chose to come to Dartmouth was to have access to New Hampshire primary politics.”

Caroline Lauer ’18 was lingering by the rope line after the former president had moved on when a Clinton aide walked over to her with a sheet of notebook paper.

“I was doing some ‘Math 13’ homework before this whole thing started. I saw people handing President Clinton things to sign, so I gave him my math homework,” Lauer said. “It’s cool, because he’s signing my homework, but I also really need my homework back now.”