Dartmouth Skiway crews spent the week blasting man-made snow onto the slopes of the College’s ski area so that it can open for the season on Saturday, the latest start anyone can remember. 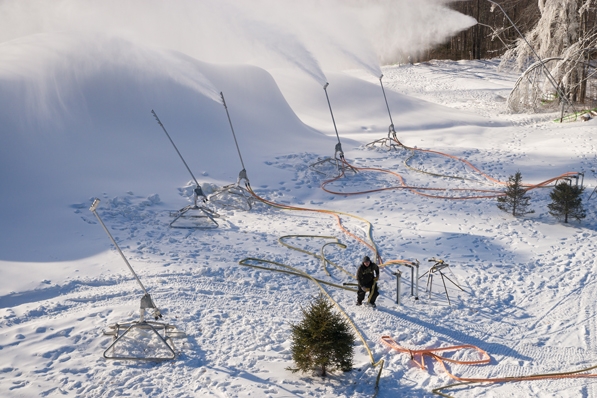 Snow is being blown onto the trails at the Skiway. (Photo by Eli Burakian ’00)

In the winter of 1979-80, the Skiway was only open for four weekends because there was no snow, “but since snowmaking, I believe this is the latest we’ve ever opened,” says Skiway Manager Doug Holler.

Skiway Assistant Manager Peter Riess says he’s never seen a January opening in his 26 years at the College mountain. “I think three times since I’ve been here we opened on Dec. 26, but that was the latest,” Riess says.

And while the recent cold snap has enabled alpine skiing to get under way, it hasn’t done much for the skating on Occom Pond or the short-term prospects for Nordic skiing, says Mike Silverman, who manages Dartmouth Outdoor rentals and the Dartmouth Cross Country Ski Center.

“We are so far behind. It’s white out there but the pond is just freezing,” Silverman says. “A week ago we had open water.”

The ice needs to be 6 inches thick to skate and 8 to 10 inches thick to drive on, he says. In addition, the cross country trails were still not groomed early this week because temperatures near 60 degrees and soaking rain over Christmas kept the ground from freezing.

“But everyone is in the same boat, even up north,” Silverman says.

Dartmouth Skiway Is a ‘Pipeline of Olympic Talent’

More About the Skiway

Still, the freakishly warm winter will not deter Dartmouth’s storied winter programs. “We just have to find creative ways to get people out and about,” Silverman says.

He is running the Sunday Story Time and Marshmallow Roast and has recruited Dartmouth students to read to children ages 3-8 by the fireplace in the main room of the Dartmouth Outing Club House, followed by crosscountry skiing or sledding as weather permits.

In addition, Outdoor Programs is sponsoring fat tire biking at the Oak Hill ski touring center, winter mountaineering, and camping programs, and will again host the Annual Howl at the Moon festivities on Jan. 29. The event is a progressive dinner on the golf course lit by torches and fire pits and catered by local merchants.

Dartmouth’s world-class ski program, which has sent athletes to every winter Olympics since 1924, is also undeterred by cold weather’s late arrival. Both the men’s and women’s alpine teams held training camp in Loveland, Colo., over the break and started the year in Panorama, British Columbia, at the NorAm tech races.

Dartmouth’s Winter Carnival is set for Feb. 11-14. The Skiway will host the alpine events as usual, while the Nordic team will be returning to the home venue at Oak Hill for a single classic distance race as part of the carnival tradition.

Holler has a ski patrol crew of about 70 staff and students ready to begin work Saturday. The Dartmouth Ski Patrol has more than 60 years of tradition at the College and has provided leadership training to generations of Dartmouth students, Holler says.

Ultimately, says Riess, there is no accounting for the weather. “Look at last year. We had more trails open than Squaw Valley, Calif.,” he says. “And winter’s not over yet. People remember all the snow last year, but they forget that most of it came after Martin Luther King weekend.”