It was an experimental course that “put Dartmouth on the map for all the right reasons,” Richard Wright, the Orvil Dryfoos Professor of Public Affairs and a professor of geography, told a crowd in Filene Auditorium Tuesday night, introducing a faculty panel discussing “Teaching Why Black Lives Matter.” 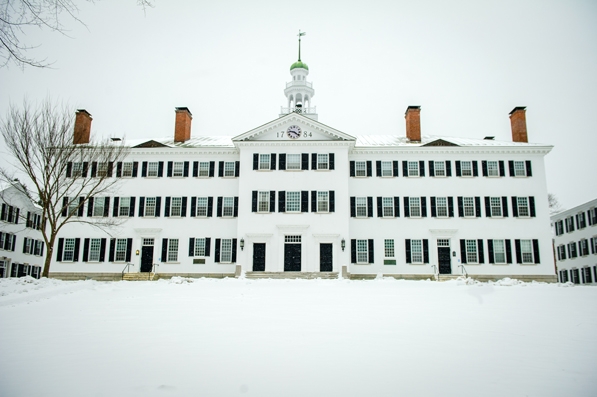 The event, organized as part of the College’s Martin Luther King Jr. celebration, was sponsored by the Nelson A. Rockefeller Center for Public Policy.

The course “Black Lives Matter,” taught last spring by 21 faculty members across the disciplines, was developed in response to the social movement that has grown nationally in the wake of protests of the killing of Michael Brown in Ferguson, Mo. About 100 students applied for the course, which was capped at 30.

Joining Wright on the panel were three other members of the “Ferguson Teaching Collective,” as the group dubbed itself—Assistant Professor of English Aimee Bahng, Assistant Professor of Geography Abigail Neely, and Associate Professor of Mathematics Craig Sutton—as well as Treva Ellison, a lecturer in geography and in women’s, gender, and sexuality studies.

MLK Celebration Kicks Off With Call for Civil Discourse

The idea for the course came out of last year’s Martin Luther King celebrations, Neely said. As part of those events, Rev. Starsky Wilson, a member of the Ferguson Commission, challenged faculty to incorporate issues from the movement into the classroom.

“Aimee [Bahng] and I were in that session, and we turned to each other and said, why don’t we teach a course on this?” Neely recalled. “We started to talk to other people, and other people got interested in it and so it sort of took off from there”—with the group developing the course listing within 48 hours, in time to get it on the books for spring 2015.

Neely said she and the other faculty thought it important to create a course, as opposed to a lecture series on the subject. “This is what we do, right? Taking one of the most, if not the most, intractable issues of this moment and talking about it in a sustained manner in class is just awesome.”

“For me it represented the best of what a residential liberal arts education can be about, which is getting a community of scholars together to talk about issues of the utmost importance,” Sutton said.

Wright gave the audience a taste of a Black Lives Matter class session, showing slides of data and maps representing patterns of segregation in urban and suburban areas. “This is a passionate interest of mine,” he said. “I just drew into the classroom what I do professionally, and what I do in my personal life as well.”

In contrast, Sutton said he joined the teaching collective despite subject matter outside his field of expertise, inverse spectral geometry.

“It was about getting out of my comfort zone as an intellectual, as a scholar,” Sutton said. “This is something we ask of the students all the time: Take these distributive requirements, take risks. And so there was a little bit of me that felt like sometimes you do have to walk the walk.”

Ellison offered “some provocations,” pushing the group to think about what the larger Black Lives Matter movement “is actually trying to teach and ask of us, as people who are producing knowledge and who are trying to learn—because I think one of the things that the Black Lives Matter movement is telling us is that knowledge production is not innocent. It’s not not bound up in some system of power.”

What’s needed, Ellison said, is to “retrain our imaginative reflexes. Just to say black lives matter is something that Western civilization is conditioned to think is false.”

The panel also discussed some of the challenges of the course. Neely described the difficulty of teaching without a common text, and the sense of disjunction students experienced from week to week as a different faculty member led each session.

“We found that it’s really hard to balance the lessons of a movement that’s unfolding in real time with the larger geographical, historical, political, etc., context,” Neely said.

Bahng announced that the “Black Lives Matter” course will be offered at least twice more in the next four years, and invited more faculty to join. “My main goal in opening the teaching collective up to as many departments as possible is to raise the question: Do you teach black lives matter in your classroom? Would you like to figure out how to teach it? So that it’s not just relegated to this one classroom space and experience.”

The next iteration of the course will differ from the original, Bahng said, perhaps most significantly because she and Reena Goldthree, an assistant professor of African and African American studies, will receive teaching credit, adding a layer of week-to-week consistency that the original course lacked.

Sutton, who served on the steering committee for Moving Dartmouth Forward, talked about how that initiative is changing the community. Sutton is one of the inaugural house professors in the College’s new residential living structure.

“What’s special about college is that, whether we leverage it or not, this is probably one of the few places where people are proximate to true diversity,” Sutton said. “And if we actually start thinking more intentionally about how we can set up structures that will allow people to explore that in a good faith and intelligent fashion, I think that’s something that can actually move us forward.”

The panelists took questions from students, faculty, and staff about the future of the course, how to advocate for change on campus and beyond, and some of the challenges the original course faced. One student asked if a course on these issues should be mandatory.

Bahng said, “My personal thought on requirement is that it should not be a requirement, but inevitable that students not graduate from this place without some sort of critical understanding about race.”

After the session, Jordyn Turner ’16 said that she found Neely’s discussion of “the politics of politeness” particularly interesting.