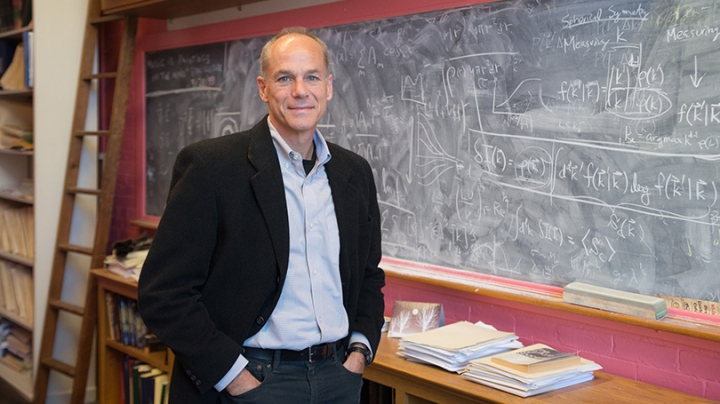 Appleton Professor of Natural Philosophy Marcelo Gleiser’s “Question Reality!” will be the first of the new courses to go into production. (Photo by Eli Burakian ’00)
1/27/2016
Body

With topics ranging from an examination of the materials that go into modern sports equipment to the nature of reality itself, five new DartmouthX courses will begin production in 2016 and 2017. They are the second round of massive open online courses, or MOOCs, that Dartmouth is creating in partnership with the nonprofit online learning consortium edX.

“This next generation of the DartmouthX initiative brings five more members of our faculty—representing the depth and breadth of Dartmouth’s liberal arts experience—to a global audience,” says Lisa Baldez, director of the Dartmouth Center for the Advancement of Learning (DCAL). “I’m looking forward to seeing how the innovations they develop through this process will translate into the undergraduate classroom.”

Two of the courses—“Question Reality! Physics, Philosophy, and the Limits of Knowledge,” led by Appleton Professor of Natural Philosophy Marcelo Gleiser, and “Free Will, Attention, Top-Down Causation, and Consciousness in the Brain,” led by Professor of Psychological and Brain Sciences Peter Tse ’84—will be produced in conjunction with the Institute for Cross-Disciplinary Engagement at Dartmouth (ICE), for which Gleiser serves as director. Funded through a three-year grant from the Templeton Foundation, ICE promotes dialogue between the sciences and the humanities in academia and in the public sphere.

Gleiser’s “Question Reality!” will be the first of the new courses to go into production. Gleiser says the idea for the MOOC grew out of an undergraduate course he taught last spring, and his recent book, The Island of Knowledge: The Limits of Science and the Search for Meaning.

“Turning this course into a MOOC has been a dream of mine, as I hope to reach students across the world,” says Gleiser, who has long been committed to the public understanding of science. “It will explore themes at the intersection of science, philosophy, and religion—how we understand our humanity in a cosmos full of mystery.”

The goals of the DartmouthX initiative, says Josh Kim, director of Digital Learning Initiatives at DCAL, are not only to expand access to learning beyond campus, but to strengthen teaching and learning inside the classroom through experimentation and collaboration.

“I think of DartmouthX as a research and development laboratory for teaching and learning on campus,” Kim says. “It will be exciting to see how we can apply the lessons we’ve already learned to this next round of courses.”

Since 2014, the College has produced four DartmouthX courses, including, most recently, “The American Renaissance: Classic Literature of the 19th Century,” taught by Ted and Helen Geisel Third Century Professor in the Humanities Donald Pease and English lecturer James Dobson. Registration for that course, which begins Feb. 16, is open now.

The other three original DartmouthX courses include “Introduction to Environmental Science,” taught by Andrew Friedland, the Richard and Jane Pearl Professor in Environmental Studies; “The Engineering of Structures Around Us,” with Vicki May, an associate professor at Thayer; and “Introduction to Italian Opera,” led by Steve Swayne, the Jacob H. Strauss 1922 Professor of Music.