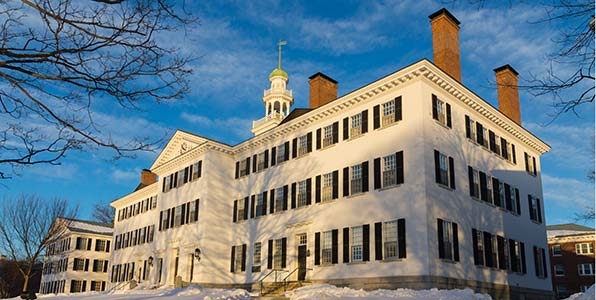 Dartmouth received $30 million in gifts during the final two weeks of 2015 to support the creation of three new academic clusters, fulfilling President Phil Hanlon’s goal of launching 10 interdisciplinary clusters by the end of the year.

By meeting the December 31 deadline for giving to the cluster initiative, four donors triggered $15 million in matching funds, ensuring that faculty will have support for research, travel, symposia, and other related activities.

The three newest clusters exemplify the breadth and ambition of President Hanlon’s vision for Dartmouth’s educational enterprise. Each of the clusters—which will focus on engineering in polar regions, improving cybersecurity, and treating cystic fibrosis—embrace a field of study in which Dartmouth is already strong.

Arctic Engineering in a Period of Climate Change

Dartmouth’s expertise in Arctic studies dates back more than half a century, when polar explorer Vilhjalmur Stefansson founded Dartmouth’s Northern and Polar Studies Program. For more than 25 years, the Institute of Arctic Studies, part of the John Sloan Dickey Center for International Understanding, has been an internationally recognized hub of cold-weather research, and the institute often collaborates with the U.S. Army Corps of Engineers’ Cold Regions Research and Engineering Laboratory, also located in Hanover.

With Barbara and Brad Evans ’64 supporting the senior professorship—to be known as the Evans Family Distinguished Professorship at Dartmouth— and an anonymous donor funding the two additional faculty positions, this academic cluster will focus on the societal and environmental impacts of increased energy production in Arctic regions, an increasingly common practice because of global climate change.

The cluster will expand student and faculty research in cold weather regions, and provide opportunities for collaborating with academic, governmental, and other institutions that focus on this field.

Brad Evans, a Dartmouth trustee emeritus, is a senior advisor at Morgan Stanley. Commissioned in the U.S. Navy following graduation, he received his MBA from Columbia Business School before commencing his career at Morgan Stanley in 1970. He co-chaired the $1.3 billion Campaign for the Dartmouth Experience and has volunteered for numerous College committees. Brad and Barbara Evans, a graduate of Tufts University, are members of the President’s Leadership Council. Two of their sons attended Dartmouth: Peter Evans ’96 and Timothy Evans ’99.

The National Security Agency has designated Dartmouth as a Center of Academic Excellence for Information Assurance Research. Further, Dartmouth has received multiple cybersecurity research grants—most recently $925,000 from the U.S. Department of Energy in late 2015 to help develop energy delivery systems that are resistant to cyber-attack for the electric power and oil and gas industries.

The new cybersecurity cluster, funded by an anonymous donor, will examine an emerging digital challenge. “The Internet of Things” is the umbrella term for a rapidly evolving world in which information systems and everyday items are connected to one another. Every year, hundreds of millions of objects with data-collecting sensors, actuators, and microcontrollers—including kitchen appliances, automobiles, and even clothing—are linked to the Internet. However, these items often lack adequate security to protect them from hackers, and their manufacturers frequently do not have the expertise to respond to digital attacks, meaning they are at risk of being hijacked.

Internationally respected in fields such as computer science, engineering, government, psychology, and sociology, Dartmouth is poised to be a world leader in understanding how to respond to the global challenges of cybersecurity today, which requires rigorous research and analysis involving technology and how people use it.

Dartmouth is at the forefront of research into cystic fibrosis, a devastating respiratory illness that does not yet have a cure. Dartmouth’s cystic fibrosis research program encompasses 24 faculty and approximately 100 investigators—including postdoctoral fellows and graduate students—and Dartmouth has received $87 million in extramural cystic fibrosis funding during the past four years.

The overarching goal of this cluster, funded by an anonymous donor, is to increase Dartmouth’s expertise in systems biology, bioinformatics, and microbial pathogenesis in cystic fibrosis.

Through this academic cluster, Dartmouth has the opportunity to take cystic fibrosis research and treatment to levels undreamed of even a decade ago. Because the disease is unique for each patient, there is a growing emphasis on developing innovative, personalized treatments. Dartmouth will create a research program with the ambitious goal of developing novel therapeutics for all cystic fibrosis patients and eliminating fungal and bacterial lung infections.