John Rassias and the Art of Teaching (‘The Atlantic’) 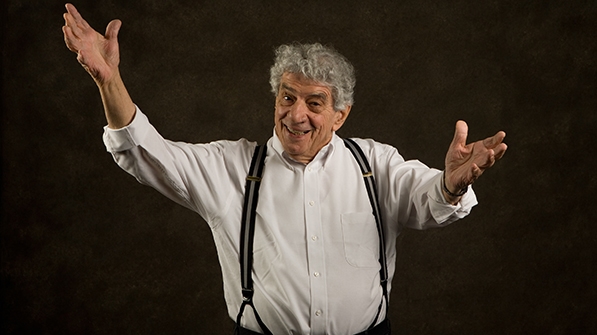 In a photo taken in 2006, John Rassias illustrates his immersive language training technique, which combines instruction with drama. (Photo by Joseph Mehling ’69)

“Early in my undergraduate years at Dartmouth College, I signed up for a French theater course,” writes Lara N. Dotson-Renta ’03 for The Atlantic. “I remember waiting in the auditorium with the rest of the class, a large one by the standards of our small liberal-arts school. It was a few minutes past the scheduled starting time, and everyone scanned the room looking for the professor.

“Suddenly the lights dimmed and a booming voice emerged from the back of the room, growing louder while reciting a passage from Jean Anouilh’s Antigone, the classic French rewriting of Sophocles. Clad in a black cape, our professor, then in his 70s, nimbly climbed over seats and acted out the scene in the aisles, inviting giggling students to stand and become players in the unfolding scene. Finally this man, already larger than life, swept up to the stage at the front of the room and drew back his cape, delivering a breathless “Bienvenue au théâtre!” to his newly found apprentices. We broke out into applause, laughing and stunned in equal measure. This would be no ordinary French class. In John Rassias’s classroom, language was an experience of the mind and body, meant to be lived and breathed.”

Rassias, the William R. Kenan Professor of French and Italian, Emeritus, and creator of the Rassias Method of teaching languages, died Dec. 2, 2015, at his home in Norwich, Vt. Dotson-Renta, now an educator herself, continues to think about the lessons she learned from him during her time at Dartmouth.

“It was through the gentle (and at times not so gentle) push to inquiry, searching, and discovery during my undergraduate years that I found my own passion for learning, and grew to fully appreciate the transformative power of a good teacher,” she writes. “For John, the art of language was not an end unto itself but a beginning, a gateway to people and culture. … Learning was worth it for its own sake, and teaching was edifying in its own right.”

Rassias gained acclaim for the innovative method of teaching languages he developed to help the Peace Corps train volunteers in the 1960s. His method combines instruction and drama, turning the teacher into a performer, as well. At Dartmouth, he founded the Rassias Center for World Languages and Cultures, which continues to offer classes.

Dotson-Renta celebrates Rassias’ passion for teaching and learning, and she says his death brought to mind a worrying shift in the nation’s approach to education. “As a culture, the country has come to place decreasing value on thoughtfulness, abstraction, and nuanced critical thinking that poses big (uncomfortable) questions rather than presuming answers,” she writes.

“With the loss of John, I mourn a beloved mentor and colleague, but also at what he represented: the humanizing potential of the humanities, of the intrinsic worth of the expansion of knowledge to the human condition, of its contribution to society.