Report on Faculty Diversity Is Released

In her New Year’s Day message to the Dartmouth community, Provost Carolyn Dever wrote, “The development of a diverse, vibrant intellectual community is the top priority of the work of my office.” 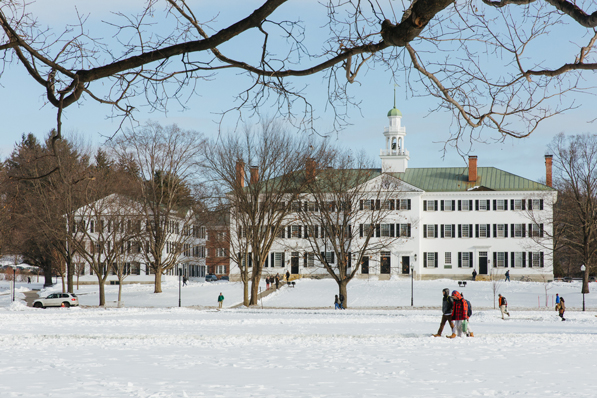 Her message reiterated a target she first announced at a 2014 meeting of the general faculty: 25 percent minority representation on the faculty by 2020, up from 16 percent.

On Jan. 7, Vice Provost for Academic Initiatives Denise Anthony—whose position was created in 2014 to focus on faculty development, recruitment, and retention, with an emphasis on building diversity—released a report detailing progress on a number of initiatives designed to meet that goal.

The report identifies three areas in which the College is building on ongoing efforts to increase faculty diversity: how Dartmouth finds, recruits, and retains talented underrepresented faculty; how it supports the success of faculty at all stages of their careers; and how the College can develop a more inclusive community.

“We are taking an approach that not only diversifies the faculty but also strengthens it,” says Anthony. “None of these initiatives are one-offs—they are interrelated, and aimed at shifting our culture from the inside.”

Dartmouth is, however, behind its peers in full professor ranks, with 4 percent minority representation compared to the almost 6 percent at the other Ivies and more than 5 percent at non-Ivy schools.

The College has committed funds to drive these numbers up and recruit more underrepresented faculty. A pool of $22.5 million in endowment funds—which provide about $1 million annually—is available to assist with the recruitment of faculty from underrepresented groups and those who would bring diverse perspectives to campus. A faculty exchange program with historically black colleges Spelman and Morehouse has been reestablished, and the College has increased support of employee resource networks—affinity groups of faculty, staff, and family that build community within and around Dartmouth.

Among the initiatives detailed in the report, Anthony announced the receipt of a planning grant from the Andrew W. Mellon Foundation to establish pilot projects to promote the recruitment of talented scholars from underrepresented minorities and to build mentorship and training programs for current faculty to support a culture of inclusion.

In addition, last year Dartmouth became an institutional member of the National Center for Faculty Diversity and Development, which offers training and mentoring resources. This partnership is helping the College expand opportunities for faculty to network and to receive professional development and mentoring.

In 2015 Dartmouth conducted a community survey to gauge the climate of living, working, and learning on campus. In an email encouraging participation, President Phil Hanlon ’77 and Dever said that information gathered from this effort would be used “to make recommendations of concrete actions Dartmouth can take to address challenges and build on our successes.” Anthony chairs the Dartmouth Community Study working group that will make these recommendations in the spring of 2016.

Also last year, the Office of the Provost launched a Leading Voices in Higher Education lecture series to bring top thinkers to Dartmouth to speak about creating inclusive, diverse environments in teaching and learning. The series features one lecture each term in the current academic year.

The next lecture in the series, scheduled for Feb. 1, will feature Linda Tropp, a professor of social psychology at the University of Massachusetts at Amherst, who will share her research on intergroup relations.

In addition to the progress made, the report recognizes that Dartmouth “also faces challenges because of a lack of sustained efforts for supportive and inclusive faculty recruitment and development. Our efforts to create change in these areas seek to enable all to thrive, including faculty from underrepresented groups, where the stakes are higher and the competition is fiercest.”

“We acknowledge that we have work to do,” says Anthony. “This is an incredibly competitive space nationally, and locally we need to do more to help the faculty we currently have be successful at Dartmouth. Thankfully, the College brings a great deal to the table as we intensify our efforts to strengthen and diversify our faculty. We are confident that we can achieve our goals.”