In its inaugural year, the Schwarzman Scholars program has selected Jordyn Turner ’16 and Jacob Gaba ’16 to join 109 other students from the U.S., China, and around the world to study for a year at Tsinghua University in Beijing, China. The two were chosen from more than 3,000 applicants from 135 countries.

“Jordyn and Jake are not only brilliant students—they are exceptional leaders who have already been wonderful ambassadors for Dartmouth,” says Provost Carolyn Dever. “I could not be more pleased that they will represent Dartmouth in China in the first class of Schwarzman Scholars.”

Founded by Stephen A. Schwarzman, chairman, CEO, and co-founder of global investment firm Blackstone, the Schwarzman Scholars program seeks “to build a global network of the world’s most talented young leaders, helping to build stronger links between China and a rapidly changing world,” according to the program’s website.

Schwarzman Scholars will earn master’s degrees with concentrations in public policy, economics and business, and international studies. The program emphasizes leadership training as well as Chinese language and culture.

For information about applying for Schwarzman Scholarships and other programs, and to see a list of past recipients, visit Dartmouth’s National Scholarships/Fellowships website. 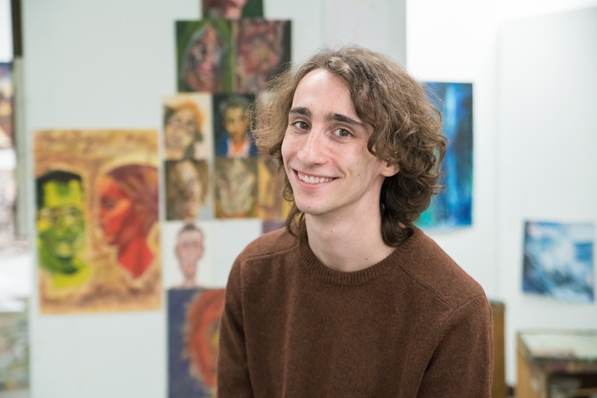 Jake Gaba ’16 is majoring in computer science modified with digital arts. He’s also an amateur filmmaker whose videos Guy Dances Across China in 100 Days and Dartmouth College—Happy have been viral YouTube hits (go ahead, take a minute and watch them again—it’s OK).

Originally from Dallas, Gaba was drawn to Dartmouth because it offered an experience different from what he knew at home. That same drive to see the world has informed his interest in studying in China through the Schwarzman Scholarship.

“The Schwarzman is the ultimate chance to hear different perspectives and gain a global world view, which I think will improve my life and my ability to tell interesting stories,” he says.

Gaba visited China in 2013 on Dartmouth’s language study abroad program in Beijing, and decided to make “Guy Dances” as a “fun way to record my travels,” he says. “Wherever I went, I carried my camera and tripod and filmed all over China. It gave me motivation to explore.”

The video garnered more than a million views between YouTube and YouKu (a Chinese video website) and drew media attention in the U.S. and in China. As a result, Gaba was invited back to China as a variety show guest on one of the country’s biggest networks. He also competed on NBC’s American Ninja Warrior last April, though his segment did not air.

Gaba is currently working on a senior thesis in which he is developing a mid-air text input tool using electromyography (EMG) technology. “At the highest level it’s the ability to type in mid-air. I’m making a sensor that you’d wear on your forearm or wrist that could detect individual finger movements.”

“Jake is an independent thinker,” says Assistant Professor of Computer Science Xing-Dong Yang, Gaba’s thesis adviser. “In the beginning of this term, he told me he wanted to do his senior thesis in human-computer interaction. After a week, he came back with his own research idea. Jake is the only undergraduate I’ve advised to date who has been able to come up with a valid research idea independently.”

Of Gaba’s receiving the Schwarzman, Yang says, “I am not surprised at all.”

Gaba has worked with Dartmouth’s Digital Arts, Leadership, and Innovation (DALI) Lab. DALI Lab Director and Research Professor of Computer Science Lorie Loeb says, “Jake has been one of the top students I’ve worked with in 30 years of university teaching. He deserves this honor.”

Gaba is also member of Sing Dynasty, a Dartmouth a capella group for which he served as musical director as a first-year student—making him the youngest leader in the group’s decade-long history.

Among Gaba’s other projects: a 360-degree virtual reality video of a zero gravity plane ride for NASA, and the user-interface for an Android app that monitors symptoms in asthma patients, developed in collaboration with a student and a professor from Thayer School of Engineering.

He has completed internships at Microsoft and Optoro, and in 2013 cofounded Symbiotic Studios, a startup that creates music and videos for local musicians and entrepreneurs, for which he serves as producer and CEO. “Filmmaking is an important vehicle for spreading ideas and connecting people,” he says.

Receiving the Schwarzman, says Gaba, “feels amazing. I’m so excited and grateful for the opportunity. I can’t wait to go back to China!” 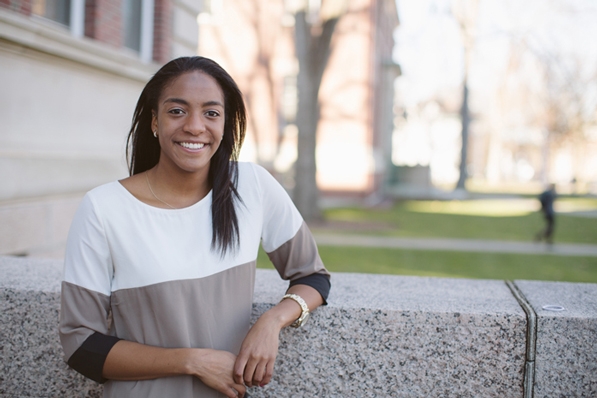 “Even when I was little I always knew I wanted to be a diplomat,” says Jordyn Turner ’16 of Plymouth Meeting, Pa.—an ambition that remains as true today as it was then. “I always like being the intermediary,” she says.

A Jackie Robinson Scholar and a Coca-Cola Scholar, Turner has traveled extensively during her time as a Dartmouth student—participating in language study abroad programs in China and Brazil and interning with a nonprofit youth program in South Africa.

“Global citizenship is just me through and through,” she says. “The idea of promoting your own culture and being a cultural representative abroad—I’ve had so many positive experiences in that regard it seems like a natural flow of things for me.”

After a high school project in which she compared Chinese and Western media, Turner knew she wanted to major in Asian and Middle Eastern studies in college. A course on “The Rise of China” with Associate Professor of Government Jennifer Lind persuaded her to also major in government, where her interests include Sino-American relations as well as constitutional law.

“I’m so excited and proud of Jordyn,” says Lind. “From the start she impressed me with her drive and focus, and it’s marvelous to see it paying off.”

Associate Professor of Government Sonu Bedi, who taught Turner in courses on civil liberties and free speech, describes Turner as “a sharp and clear writer with a genuine passion to address issues of racial and ethnic injustice.”

At Dartmouth, Turner played varsity basketball for two years, then decided to focus more on academics and other extracurricular activities. She joined Kappa Delta Epsilon, and is currently president of Dartmouth’s PanHellenic Council.

“I’ve always seen the Greek system as a place to replicate the team experience,” she says. “I’ve been particularly invested in helping it do a better job of building community.”

She has served as Greek liaison to the Inter-Community Council, board member and staff relations coordinator for the Green Team bystander initiative executive board, and secretary of the Student Assembly’s alcohol and harm reduction committee. She is president of the Dartmouth Subtleties a capella group, and a Rockefeller Leadership Fellow through the Nelson A. Rockefeller Center for Public Policy. She has also worked as an intern and reception assistant in Admissions, received a Tucker Foundation fellowship, and is a member of Palaeopitus Senior Society.

In addition, she has completed internships with Bank of Montreal Capital Markets and with Montgomery, McCracken, Walker & Rhoads, LLP, in Philadelphia.

“Jordyn will make a fantastic student of public policy, bringing her analytical skills, passion, and hard work to the program,” says Bedi. “I’m thrilled that she will be able to continue her studies in China. It is well deserved.”

“The Schwarzman is a global scholarship bringing together global citizens for global learning—that’s the pinnacle of everything that I’ve been working for,” Turner says. “It’s a huge honor and so humbling to have been chosen from a pool of such high-caliber candidates to be a member of the program’s inaugural class. I’m looking forward to returning to Beijing.”

About the Schwarzman Scholars

Schwarzman Scholars was inspired by the Rhodes Scholarship, which was founded in 1902 to promote international understanding and peace, and is designed to meet the challenges of the 21st century and beyond. Admissions for the Schwarzman opened in the fall of 2015, with the first class of students in residence in 2016. Learn more at www.schwarzmanscholars.org