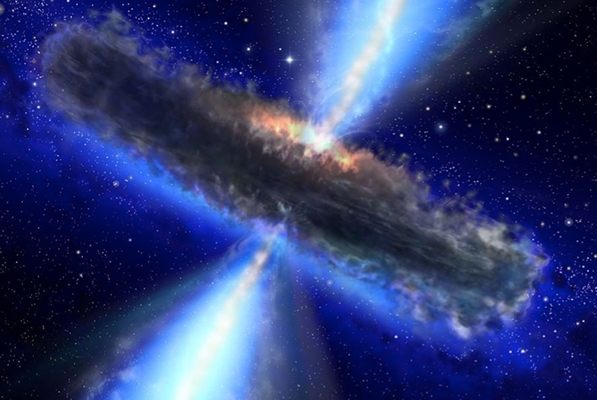 An illustration of a supermassive black hole. (Courtesy of NASA/ESA)

A prestigious award from the National Science Foundation (NSF) will aid astrophysicist Ryan Hickox in his quest to understand “hidden monsters.”

The “monsters” Hickox studies are supermassive black holes, and the grant, a Faculty Early Career Development (CAREER) Award, offers five years of support for his project, titled “The Hidden Monsters: Cosmic Evolution of Obscured Supermassive Black Holes.” Hickox will use the funding, totaling $672,000, to analyze data generated by observatories in which Dartmouth is a partner, including the Southern African Large Telescope and the MDM Observatory in Arizona. Hickox and his research team will also perform statistical analyses of large data sets from NASA space observatories. 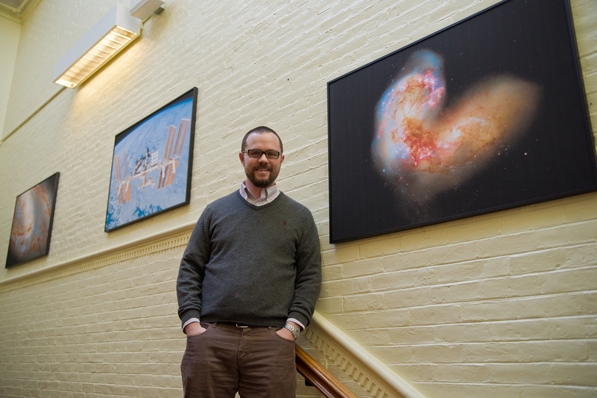 Ryan Hickox stands by an image of the Antennae Galaxies, the nearest and youngest examples of a pair of colliding galaxies. (Eli Burakian ’00)

Through the Faculty Early Career Development Program, the NSF identifies scholars who are able to integrate research and education. Hickox, an assistant professor in the Department of Physics and Astronomy, studies the nature of black holes, the evolution of galaxies, the structure of the Universe, and other large-scale celestial structures and events.

“I’m delighted and grateful to have received this award from the NSF,” Hickox says. “The grant will allow us to attract even more talented researchers to our group over the next five years, and to expand our studies of ‘hidden’ obscured supermassive black holes by exploring the nature of the galaxies and large-scale cosmic structures in which these mysterious objects reside.”

Hickox, who in addition to his research and teaching will serve as the House Professor for West House, one of Dartmouth’s new residential communities, is also excited about the educational opportunities the grant will provide.

“This NSF award will also enable us to expand our AstroConnect science education program, which uses video chat such as Skype to connect professional astronomers with K-12 classrooms in the Upper Valley as well as cities around the country,” he says.