The daughter of a Jamaican mother and an English father, novelist Zadie Smith writes stories about people who straddle different cultures and ideologies, from Bangladeshi immigrants in London to Jehovah’s Witness converts to affluent professionals still reluctantly tied to their working-class roots. 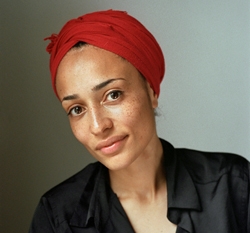 Award-winning author Zadie Smith will be on campus on Feb. 2. (Photo by Dominique Nabokov)

Smith will be on campus to discuss her work at 4 p.m., Feb. 2, in Oopik Auditorium in the Class of 1978 Life Sciences Center. The event is sponsored by Dartmouth’s Leslie Center for the Humanities.

“I find myself falling back in love with stories and appreciating anew what an unprecedented privilege it is to make your living telling them,” Smith told the 2014 Moth Ball Gala, at which she accepted the Moth Award for storytelling. “The unlikeliest story of my life is the one about the girl from Willesden who found readers in the United States.”

Salman Rushdie Calls for a Return to Magic in Fiction

Her debut novel, White Teeth, came out in 2000 and told the interconnected stories of the multicultural residents of Willesden, North West London—the neighborhood where Smith grew up and a place that has become as much a character as it is a setting in her novels, from White Teeth to NW, published in 2012.

White Teeth was a sensation—it won the Whitbread First Novel Award, The Guardian First Book Award, the James Tait Black Memorial Prize for Fiction, and the Commonwealth Writers’ First Book Award—and launched what has become a prolific and celebrated career. Smith’s second novel, The Autograph Man, won The Jewish Quarterly Wingate Literary Prize, and her third novel, On Beauty, was shortlisted for the Man Booker Prize, and won the Commonwealth Writers’ Best Book Award and the Orange Prize for Fiction.

Her short stories, essays, and journalism have appeared in The New Yorker, Harpers, The New York Times, and The New York Review of Books, among others. As a journalist, she has interviewed Jay-Z and written about comedy duo Key and Peele, among other subjects. Her essays have addressed the finer points of what makes jokes funny, code-switching, motherhood, and global warming. She currently teaches creative writing at New York University.

Following a discussion with Graziella Parati, the director of the Leslie Center, and Leslie Center postdoctoral fellow Nisha Kommattam, Smith will answer questions from the audience, then meet with undergraduate and graduate student members of Students for the Humanities in the Leslie Center.

Smith’s visit is part of an ongoing series organized by the Leslie Center. “Our goal is to present some of the most significant writers of the Western world working today and create opportunities for students and faculty to engage in dialogue with them,” Parati says.

In October, the center brought Booker Prize-winning author Michael Ondaatje to campus. Ondaatje, who described himself as a “compulsive editor,” read from a selection of his poetry and fiction and engaged Parati and members of the audience in a wide-ranging discussion about the creative process, translating novels to film, and how to write about violence without glorifying it.