Dartmouth Students Turn Out in Force for the N.H. Primary

By midday Tuesday, Feb. 9, hundreds of Dartmouth students had cast their ballots in the New Hampshire presidential primary, many voting for candidates they had seen or met at the College. 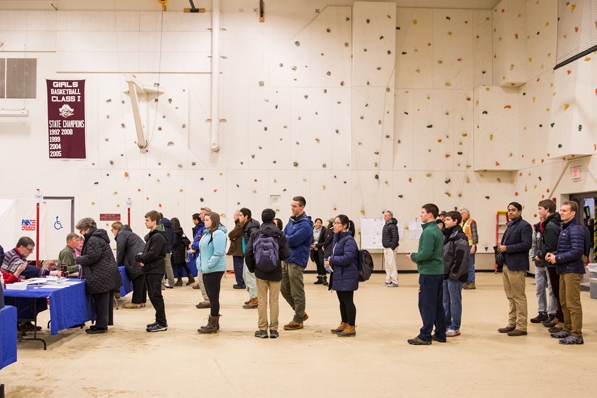 read this story about voting
Dartmouth students and other Hanover voters line up to cast their ballots in the New Hampshire presidential primary Tuesday at the Hanover High School polling place. (Photo by Robert Gill)

New Hampshire primary election returns for the town of Hanover, which include Dartmouth College resident students:

Dartmouth Students Size Up The Candidates

Foot traffic was heavy at the Hanover High School polling place, with more than 2,000 ballots cast by noon and a steady line of voters, many of them students, taking advantage of same-day registration.

Elaine Hawthorne, a supervisor of the checklist for Hanover, pointed to a growing stack of new registration forms. “Dartmouth students are just rolling in,” she said.Gwen Williams from the Dartmouth undergraduate housing office was set up with a laptop behind the registration table. She was verifying students’ campus residency, part of a longstanding official arrangement between the College and the town of Hanover.

Monica Lee ’19 took advantage of the free shuttle from Robinson Hall to the polls, arranged by the Dartmouth chapter of NextGen Climate, a clean energy advocacy group, and driven by members of the Teamsters Union Local 633.

Lee had seen Hillary Clinton, Bill Clinton, and Bernie Sanders when they came to campus during primary season.

“It’s insane. I never thought I’d have that opportunity to see the possible next leader of our country, and a former leader, for that matter. It is an incredible Dartmouth experience,” she said.

Lee registered as a Democrat in the fall during a registration drive at the Nelson A. Rockefeller Center for Public Policy co-sponsored by the campus Democrats and Republicans.

Asked if she had made her choice yet, she said, “Up until last night I was still 50/50, but I’m going to vote for Bernie. My beliefs line up with Bernie more strongly, but I wasn’t sure he could win until I saw how well he’s doing in the polls.” 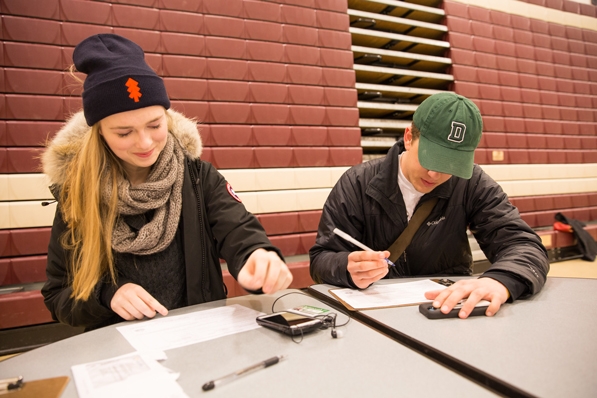 Cara Van Uden ’19 and Christian Williams ’19 register to vote in Hanover before casting their ballots in the New Hampshire primary on Tuesday. (Photo by Robert Gill)

Outside the Hanover High gym volunteers for Clinton, Sanders, and Republican John Kasich held signs and greeted voters. Someone had stuck a Jeb! sign in the snow and left, but state rules require that election signs be attended, so the Bush promotion was tossed up on the snowbank.

Ben Vihstadt ’16, holding a Kasich sign, returned the wave of a woman heading in to vote. He asked if she would vote for Kasich.

Vihstadt, part of a group of some 15 campus organizers for Kasich, had met the Ohio governor during his two visits to campus, and had a chance to ride with Kasich on his bus during a campaign swing through the Upper Valley.

“We’re hearing from people who crossed party lines to support Kasich because they thought Bernie had a good lead in the Democrat race,” Vihstadt said. “I’ve even had professors tell me it was the first time they have ever voted in a Republican primary—to support Kasich.”

Madison Minsk ’19 registered at the polls Tuesday. She saw Hillary Clinton and Bernie Sanders on campus, and took a selfie with Bill Clinton at the Hop, but she wouldn’t reveal who she planned to vote for.

“I think I’ve decided, but it was tough, very tough,” she said.