As the Roth Distinguished Visiting Scholar at Dartmouth for the 2015-2106 academic year, physicist Sylvester James “Jim” Gates Jr., has been a busy man. 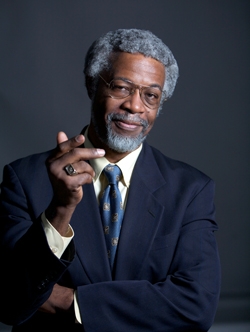 “This has been an exciting time here for me,” he says. “I delivered a plenary talk at the Joint Fall Meeting of the American Physical Society and American Association of Physics Teachers hosted on campus, and I made two presentations about my own research on physics, graph theory, and mathematics.”

Then he brought in University of California, Berkeley mathematician Yan Zhang, who spoke about Gates’ research and its relevance to work underway in the Dartmouth mathematics department.

“I have also had the opportunity to lecture in the Datascapes class, headed by Professor Michael Casey and Professor Carlos Casas,” Gates says. “Most recently, I had a great time with the Dartmouth Physics Society students. The breadth of these activities is a reflection of the environment I have found here on campus. In fact, this breadth continues to surprise me.”

Lately, in his Roth Scholar role, an endowed professorship that brings thought leaders to campus to interact with students and faculty to stimulate intellectual inquiry, Gates has been engaging students and faculty in forums and presentations dealing with both physics and mathematics. His PhD from MIT was in physics, but he had earned twin MIT bachelor’s degrees in both disciplines and still keeps a foot in both camps.

“Most people do not know I was an assistant professor of applied mathematics—not physics—at MIT from 1982-1984,” he says.

Even before he became a Roth Scholar, Gates was no stranger to the College. He has regularly visited campus for the annual E.E. Just Symposiums since 2012, speaking about science, scholarship, and string theory.

In fact, Gates planted a surprise of his own in his 2014 E.E. Just lecture at Dartmouth. His words are particularly memorable in light of this month’s momentous discovery of gravitational waves. He had spoken about these yet-to-be discovered ripples in the fabric of space-time, not only predicting their recent revelation, but also describing the tools scientists would use in making the discovery.

Einstein had postulated gravity waves’ existence back in 1916, but the hard evidence had been lacking. The news of the breakthrough was announced Feb. 11. It seems that Gates’ scientific crystal ball been up and running in 2014. 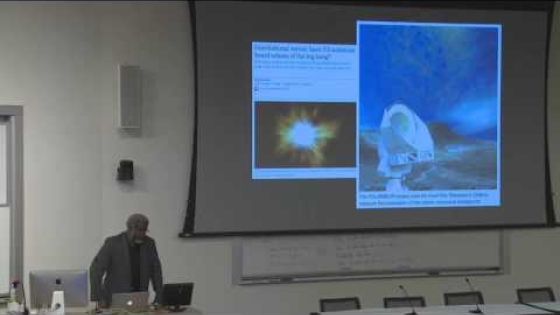 Remote video URL
“When the Cosmos Does the Wave, It Does Wave Gravity”

The high-powered, low-key theoretical physicist is the University System of Maryland Regents Professor, Distinguished University Professor, John S. Toll Professor at the University of Maryland, College Park, director of the Center for String and Particle Theory, and an affiliate professor of mathematics. A dedicated teacher in his 44th year and a man committed to popularizing science, Gates is known for his accessible approach to scientific complexities. Seemingly everywhere at once, he appears as “the brainiac” on a TurboTax television commercial, a TV spokesman for Verizon networks, the go-to authority on gravitational waves for the BBC, and a regular on PBS documentaries, including NOVA.

Renowned Physicist Is the Next Roth Distinguished Scholar

E.E. Just Symposium: The Higgs Boson to the Music of Physics

His work has brought him many accolades, including the National Medal of Science awarded by President Barack Obama in 2013. In 2014, he was the first African American to be inducted into the National Academy of Sciences in its 150-year history. Gates also sits on the U.S. President’s Council of Advisors on Science and Technology, the National Commission on Forensic Science, and the Maryland State Board of Education.

A January pilgrimage to Washington, D.C., took Gates to the National Science Foundation, where he gave a talk on forensic science and criminal investigation. Gates then met for two days with fellow members of the President’s Council of Advisors on Science and Technology, and was off to Australia.

At Western Sydney University he spoke about climate change and the environment and then participated in the Big History Anthropocene Conference at Macquarie University, also in Sydney. The meeting also focused on the impact of the human race on the environment.

Gates returned to the Dartmouth campus in mid-February.