Calling the New Hampshire primary a “reset button” for presidential campaigns, Jeb Bush held a detailed policy discussion with voters in Hanover Tuesday, the day after finishing in the lower tier of the Iowa Republican caucus. 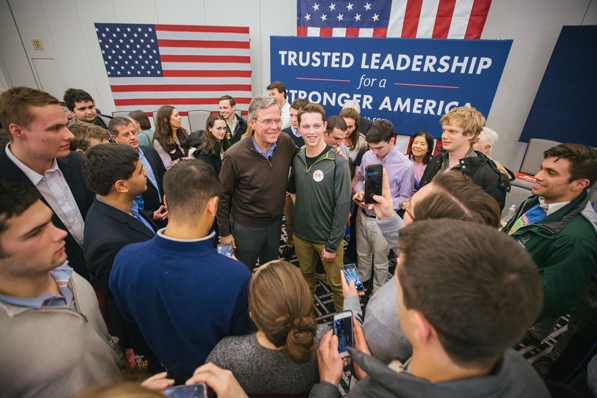 After his opening remarks, presidential candidate Jeb Bush took questions for more than an hour, explaining his policy positions on many issues, and posed for photos with students and other members of the audience. (Photo by Robert Gill)

At a gathering of about 150 Dartmouth students and Upper Valley voters at the Hanover Inn Tuesday night, Bush said he was confident New Hampshire voters would size up and appreciate his leadership abilities.

Primary Season at Dartmouth Gears Up With Candidate's Visit

He contrasted his executive experience and conservative credentials as the former governor of Florida with what he called the rhetorical talents of Sen. Ted Cruz, winner of the GOP Iowa caucus, and Sen. Marco Rubio, who aims to build momentum in New Hampshire after his third-place Iowa finish.

“The two senators are gifted speakers, charismatic beyond belief, smart as a whip—both of them. I admire them, but what about their past?” Bush said. “With all due respect to both of them, they have had two bills that have become law.”

As for Donald Trump, who arrived in New Hampshire Tuesday looking to regain the frontrunner title after his second-place Iowa showing, New Hampshire voters will not be fooled by him, Bush said.

“Donald Trump is not a leader. It’s about him—all about him,” Bush said.

After his opening remarks Bush took questions for more than an hour, explaining his policy positions on many issues, including repealing and replacing Obamacare with a system that promotes innovation among private insurers; cutting individual tax rates from seven brackets to three at 10 percent, 25 percent, and 28 percent; and keeping Social Security solvent by raising the retirement age, setting payments based on income, and encouraging retirement savings.

While he was governor, Bush said, Florida cut taxes every year totaling $19 billion; took on the public unions and reduced government workers by 11 percent; and led the nation in job growth seven out of eight years.

“Don’t you want to see that in Washington, D.C.?” he asked. “To be a strong leader you need to know when to take a stand and when to forge consensus. We need a president who is a uniter again,” Bush said.

Colleen O’Connor ’19 was holding a "Jeb!" pennant in the crowd Tuesday. She said she is still making up her mind, and is excited to be able to see the candidates in person when they come to Hanover.

“I’ve never been in a place where all the candidates come to me. It’s super exciting,” O’Connor said.