Professional singers and dancers typically spend about 10 weeks rehearsing a Broadway play. At Dartmouth, in contrast, student performers and crew pull off a major production in just five frenetic weeks while juggling classes and other responsibilities.

On Feb. 19, when the curtain rises at the Moore Theater on Chicago: A Musical Vaudeville, a huge cast of actors will put their talents on full display. But they couldn’t succeed without Kyla Mermejo-Varga ’17, the multitasking stage manager who holds the whole production together. 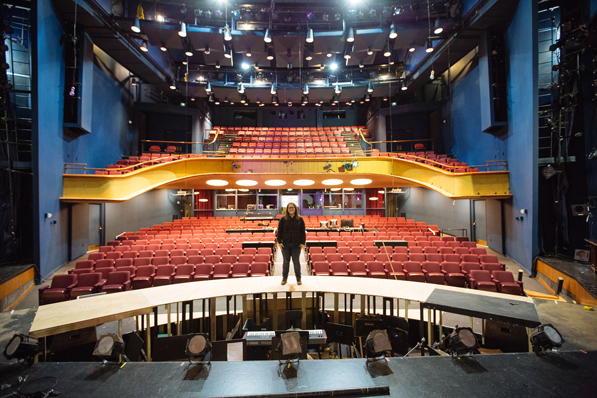 Kyla Mermejo-Varga, the stage manager for Chicago: A Musical Vaudeville, stands on the stage set under construction at the Moore Theater. (Photo by Robert Gill)

Starting with auditions, Mermejo-Varga and the team of assistant stage managers communicate the rehearsal schedule, take detailed notes through every rehearsal, call out lines to actors who forget them, and solve seemingly intractable problems. During the production, sitting in a booth, the stage manager gives second-by-second cues for lighting, projection, and any scenery that moves mechanically into place. If the show goes off without a hitch, it’s her unheralded triumph. If there’s a glitch, she will work with the team to fix it that night or make sure it is corrected in the next performance.

Mermejo-Varga says she became a drama major almost by accident. Her first weeks in college, she was homesick. So even though she had no experience in theater, she took a work-study job at the scene shop just to meet people. “The theater community here is so welcoming. I just fell in love with it,” she says.

Quietly confident about her organizational skills, Mermejo-Varga has no interest in performing. She’d rather work behind the scenes.

Chicago, she predicts, will be as provocative as it is entertaining. 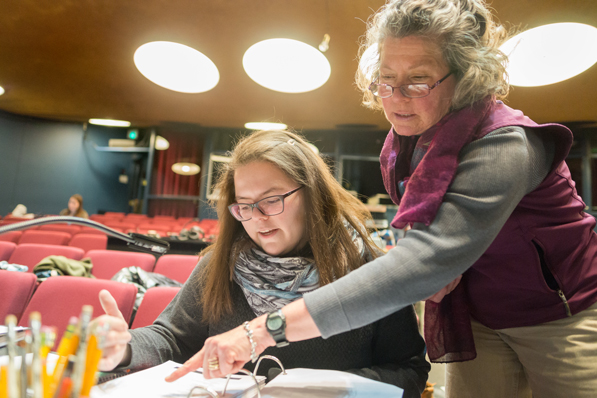 Kyla Mermejo-Varga ’17 goes over the script with Kathleen Cunneen, stage management adviser in the Department of Theater. (Eli Burakian ’00)

The racy script and glitzy dance numbers tell the story of Roxie Hart, a 1920s housewife and nightclub dancer who murders her lover and grabs headlines for her crime. “Our production will differ from others a great deal in that we are examining the ridiculousness of unearned fame through the lens of our obsession with people like the Kardashians,” Dunne says. “‘Stop making stupid people famous’ is our mantra.”

That’s a tough job, sending a dark message about the wrong kind of fame while singing and dancing showstoppers like “Razzle Dazzle.” Mermejo-Varga says the cast is brilliantly performing on that double edge.

“It was just incredible to see what leaps and bounds they made after only a week of rehearsal,” she says.

Mermejo-Varga climbs a steep learning curve, too, mixing mundane tasks with much more difficult ones. Late one afternoon midway through rehearsals, she’s spray-painting lighting fixtures as part of her work-study job in the scene shop.

“I’m running on four hours of sleep,” she admits, “because I had a paper due for a theater class today.” Some mornings, she works in the theater department’s administrative office, marketing the show. When not in class or rehearsal, she’s sending out a blizzard of emails to cast and crew, communicating the wishes of the director and the choreographer.

The show starts coming together during the final rehearsal week, when dancers adjust their steps around stage sets still in progress, the sound engineer and orchestra add themselves to the mix, and hundreds of cues for lighting are set and painstakingly revised. Tech run-throughs are always frustratingly stop-and-go. But as Mermjo-Varga, speaking through her headset, asks actors to take and re-take their places as they repeat and refine scenes, she remains as upbeat and unflappable as she was on the first day of auditions. She says “please” and “thank you” a lot. Friends bring her food, since she can’t leave her theater post for hours at a time.

“Stage managing is insanely demanding, but I love it,” she says. “There’s no better feeling than when you have finished calling a show—sending out all the cues for the actors and the crew—and you hear the applause. You know it’s for the actors, but you also know you helped them do their best.” Chicago opens Feb.19 and runs through Feb. 28. At 5:30 p.m. on Saturday, Feb. 20, the set and lighting designers will give a free talk about the process of making theater.