“It was a surreal phone call,” says composer Ashley Fure, who joined the music department this past fall as an assistant professor, of receiving a “Grants to Artists” award from the Foundation for Contemporary Arts (FCA)—an unrestricted $40,000 prize for artists creating pioneering work. 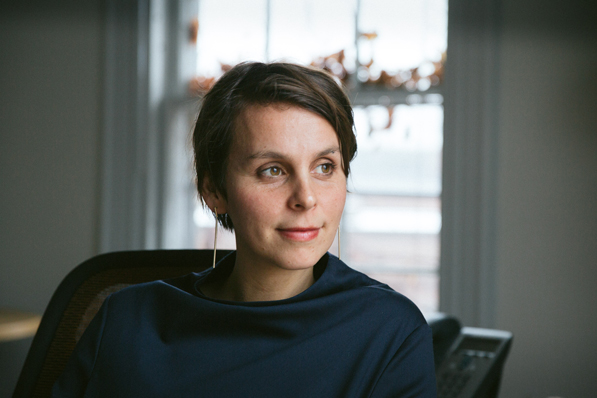 “I’m looking to cause a certain jolt of presence, which is why there’s often a mix of violence and fragility in my work,” says Assistant Professor of Music Ashley Fure. (Photo by Robert Gill)

“The nomination process is anonymous, so I had no I idea I was under consideration,” says Fure. “I think I actually said to the woman on the phone, ‘That doesn’t make any sense. How do you know who I am?’ ”

But it’s no surprise that the foundation created by experimental composer John Cage and neo-Dadaist painter Jasper Johns, among other contemporary art luminaries, would recognize Fure—whom The New York Times calls “one of the finest young composers around”—as one of their own.

Fure’s acoustic and electroacoustic compositions create what she describes as “sensory provocations”—immersive experiences that sometimes “manifest on a detuned double bass string, and sometimes manifest in 15-foot elastic strings that are whipped by motors into massive fields of kinetic waveforms.”

“I’m looking to cause a certain jolt of presence, which is why there’s often a mix of violence and fragility in my work,” she says. “The violence keeps us on edge, almost uncomfortably alert, and that heightened focus can then feast on all sorts of obsessive nuance.”

Fure knows her work may strike some people as “weird art.”

“But that weirdness is a byproduct, not a goal,” she says. “Really I’m a hedonist—I’m looking for sounds and materials and processes that move me, that draw me in, that somehow leave an imprint on my skin. I use my own reactions as a compass.” 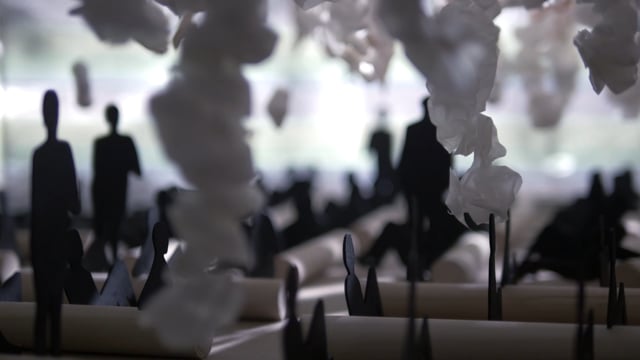 Earlier this month, Fure was the subject of a Composer Portrait concert at the Miller Theatre at Columbia University. The performance included an excerpt of a work in progress: “The Force of Things: An Opera for Objects,” which she is creating in collaboration with her brother, architect Adam Fure, to premiere this summer in Darmstadt, Germany.

When complete, “The Force of Things” will be big: The audience will sit under a dense canopy of hanging things that transform through sound, light and movement as the piece unfolds. She says the piece is “looking for drama and pathos and expressive power in strange material sources. Essentially, it’s a music drama that’s not about humans.”

“The multimedia work that I do is collaborative, usually because I want to work at a scale that’s beyond my DIY ability to execute,” she says.

Collaboration also allows Fure to explore beyond the traditional boundaries of artistic disciplines, from visual art and architecture to dance and lighting design. “We’re not looking for sound that’s a soundtrack to visual experience, we’re not looking for movement that’s simply the staging of a script,” she says. “We’re looking for these synesthetic relationships where movement in one medium causes a reaction in another, where causes and effects blur across those boundaries of media.”

Growing up in small-town Michigan, “where there wasn’t a lot of classical music,” Fure took piano lessons from an early age, often performing some original pieces, but says she had no idea that composing was “a thing people do.”

When an injury kept her off her high school basketball team, a school counselor, knowing about her love of music, suggested she apply to the Interlochen Arts Academy in Michigan. She studied composition there, then went on to conservatory at Oberlin and graduate school at Harvard. She spent five years in France and Germany studying at the electronic music institute IRCAM in Paris, as a fellow at the Akademie Schloss Solitude in Stuttgart, and as a Fulbright Scholar in Paris.

Fure was thinking about returning to the U.S. when she saw a job listing in sonic arts at Dartmouth and tossed her hat in the ring. “I was impressed by the colleagues and by the curriculum—both graduate and undergraduate. I lucked out and got the gig. So far, it’s been great.”

She taught “Introduction to Sonic Arts” in the fall and will teach two more classes—“Sound Art Practice,” and a master’s seminar on noise—this spring. Her courses combine theory and practice, she says.

“The critical and the creative are closely connected. We try to develop a language that allows us to respond to and interpret a broad range of repertoire, and then we turn that critical lens back toward our own ideas. Ultimately these courses are about experiencing sound in new ways and making creative work.”

She is also looking forward to working with colleagues on developing curriculum around creative collaboration. “Collaboration can go really right or it can go really wrong. I’ve learned a lot about how to structure those conversations, and that’s something I’m interested in teaching.”

Dartmouth audiences heard one of Fure’s compositions for cello and live electronics during last spring’s Festival of Contemporary American Music at the Hopkins Center for the Arts, and Fure hopes to bring more work to campus in the future. “I’m excited to bring the work back. I think it’s important, too, for students to be able to catch a glimpse of the process through which this stuff gets made,” she says.

As for what she’ll do with the FCA grant, time will tell. “It’s a rare grant in the sense that it’s totally unrestricted,” she says. “I want to keep it in my back pocket until I need it for that experiment that nobody else will fund but I have to make.”